Whether or not a nuclear energy renaissance will be borne out at a global level, the concept remains salient in the Gulf region. In the past decade, a number of Gulf states have signalled ambitions to develop domestic nuclear energy programmes.  Amid concerns over volatile oil prices, rising domestic demand for energy and water supplies and efforts to diversify the national energy mix, the move to nuclear energy in the Gulf is gaining momentum. Despite the interest, however, adding nuclear to the national energy mix is no easy feat. The process is riddled with unexpected delays, technology redesigns, safety and security risks, and regulatory hurdles – all of which push up costs.  Many of the Gulf states are better placed than most to invest in technology that will not produce financial returns for years and comes at considerable financial risk. Nonetheless, their decisive shift in energy policy was unanticipated by much of the international community, not least due to the region’s vast oil and natural gas reserves.

The shift began in 2006 when the Gulf Cooperation Council (GCC) announced it was interested in developing nuclear energy technology for peaceful purposes and would establish a joint research programme. This marked a significant shift in policy by the GCC, which previously had promoted a ‘zero nuclear option’ for the region – eschewing the acquisition of nuclear technology in favour of international non-proliferation agreements.

With this change in position the GCC opened negotiations with the IAEA to seek approval for research activities. In parallel, individual Gulf states began negotiations with the IAEA to develop their own civil nuclear programmes. The United Arab Emirates (UAE) and Saudi Arabi have the most advanced nuclear energy programmes in the region. In 2012, the UAE began construction on its first nuclear site, Barakah; when completed by 2020, the four reactors’ output will be enough to supply 25% of the UAE’s electricity needs. Whilst Saudi Arabia’s programme has proceeded at a slower pace, the Kingdom has ambitions to become the largest nuclear power producer in the Middle East; plans envisage the construction of two nuclear reactors by 2040 – enough to supply 15% of anticipated energy needs. Bahrain, Qatar and Oman have to date undertaken feasibility studies, whilst Kuwait has signed nuclear cooperation agreements with states including Russia, France and Japan. Yemen has collaborated with the IAEA to draft a nuclear legal framework – with the objective to build a commercial nuclear plant by 2035 – but the ongoing conflict there makes progress unlikely for the foreseeable future.

Achieving a balance in energy supply

Given the region’s large endowment of oil and gas reserves it appears counterintuitive for specific Gulf states to invest in nuclear energy. Nuclear power plants are prohibitively expensive – costing in the tens of billions of dollars – and the political and legal hurdles are complex and time-consuming.  Any attempt to develop civilian nuclear energy requires participation with and adherence to the standards of the International Atomic Energy Agency (IAEA)-the global body entrusted with furthering standards and cooperation in the development of nuclear energy.  When a state decides to develop nuclear power, it is necessary to introduce new legislation, create an independent regulatory body and meet a raft of performance, safety and security standards. In spite of these challenges, nuclear power makes more sense when the region’s longer-term challenges are considered, in particular rapid demographic growth, severe water shortages and environmental degradation hastened by climate change. Safeguarding energy supplies are a priority for many states in the region giving support to transition from reliance on carbon based energy supplies towards sustainable solutions that maintain economic activity.

Currently, GCC states are reliant on oil and gas revenues with the sector contributing, on average, around 40% of GDP-though this number fluctuates with international oil prices.  The UAE is an exception with efforts at economic diversification reducing the share of total exports from hydrocarbons to around 20%. However, other GCC economies are highly vulnerable to oil price fluctuations, with hydrocarbons making up at least 65% of exports and 75% of fiscal revenues. Part of the argument for broadening the energy mix relates to economic diversification.  Gulf states are cognisant of the pressing need for economic diversification amid the restructuring of world energy supplies influenced by North American shale development, weakening industrial output in China and the sanctions situation with regards to oil producers such as Iran and Venezuela. The geopolitical landscape meanwhile is experiencing an unprecedented period of volatility.  Nuclear energy is relatively cushioned from changes in oil prices, and as such provides the Gulf states some protection from volatility in global markets.

Rising to the demographic challenge and climate change

Ever increasing domestic demand for electricity is another reason for the Gulf states to diversify the energy supply. The region is encountering rapid urbanisation, industrialisation and population growth.  Indeed, energy consumption in the Gulf is rising faster than almost anywhere else in the world.  Domestic demand requires supplies of conventional capacity, which has led to some Gulf states becoming net importers of natural gas.  Whilst rising energy demand could in theory be met by burning more fossil fuels, the structure of international oil markets makes this option unattractive economically as well as unsustainable over the long-term.

As evident in Figure 1, the populations of Gulf states have risen dramatically over the past decade and are projected to continue to grow at a fast pace over the next decade. As evident in Figures 2 and 3, this places major strains on available energy and water, with population growth outstripping supplies of both these utilities. Furthermore, increased demand for water compounds demand for energy owing to the widespread use in the Gulf of energy-intensive reverse osmosis to produce potable water. Continuing fast economic growth across the growth is likely to make these longer-term resource challenges even more pressing. 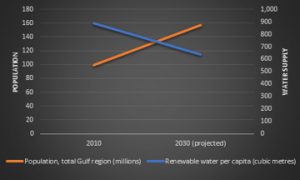 Figure 2: Projected population growth versus energy demand in the Gulf[4] 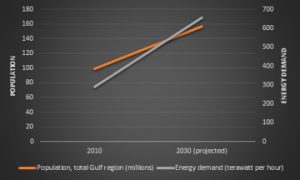 Figure 3: Projected population growth versus water supplies in the Gulf

The GCC is hoping to grow a local energy market through the GCC Interconnection Grid, a regional power network that interconnects the national grids of the member states.  This grid helps to guarantee an adequate power supply, thus minimising blackouts as well as reducing the overall cost of power generation. In the future, it could facilitate energy trading with states and regions further afield. Currently, most domestic demand is met by natural gas supplies but, with regional natural gas supplies dwindling and the economic imperative to retain hydrocarbon exports, nuclear power could play a key role in filling shortfalls in capacity by providing baseload power. Nevertheless, there are potential issues around implementation as well as the inherent challenges to grid capacity during nuclear plant shutdowns.

Gulf leaders have at various times cited nuclear energy as contributing to efforts to tackle climate change. Speaking at the 2017 Atlantic Council’s Global Energy Forum, a UAE official referenced nuclear energy as part of plans to convert to renewable energy usage and said the UAE aimed to become the world’s best-prepared country to respond to climate change. Transitioning to nuclear power will undoubtedly reduce greenhouse gas emissions, something that the Gulf states are increasingly recognising. Yet there is little evidence that this issue was a contributing factor to the GCC’s u-turn on nuclear energy in 2006.

Meanwhile, the development of nuclear activities will result in other environmental impacts, most obviously finding solutions to radioactive waste and future decommissioning of nuclear plants. There are also safety risks from seismic activity, with major ramifications for the low-lying and densely-populated Gulf coast. As the 2011 Fukushima disaster highlighted, even the most advanced nuclear power facilities are not immune to environmental and natural hazards.

There are profound geopolitical implications for states seeking to develop nuclear activities.  Nuclear technology is always sensitive due to its dual-use potential for military application.  A basic requirement for a nuclear energy programme is to formally recognise IAEA safeguards and the export guidelines of the Nuclear Supplier Group.  Governments also need to sign multiple agreements with international vendors for components required in the fuel cycle. As a result, states developing nuclear energy tend to forge new trading relationships – including with governments where diplomat relations barely existed before – and these might lead to further economic opportunities.

In the case of the UAE, the government initiated its civil nuclear programme by signing an IAEA safeguards agreement in 2002. It then went on to reach cooperation frameworks with France and the UK in 2008 to develop nuclear energy for peaceful purposes, as well as signing the IAEA’s Additional Protocol on the application of safeguards. The crucial step came in 2009 when a 123 Agreement with Washington entered into force. To date, the UAE is the only Gulf state to have signed such a deal, which provides access to US nuclear technology but also obliges states to import all nuclear fuel and forgo domestic enrichment and reprocessing facilities (nodes of the fuel cycle where dual use application is most likely).  Notably, a 123 Agreement contains stricter provisions on non-proliferation than the equivalent arrangements with states such as Russia and China.

There is an ever growing interest in the use of nuclear energy in the Gulf.  At present the UAE and Saudi Arabia are the only Gulf states actively pursuing nuclear power as part of the national energy mix, other governments have made tentative steps in pursuing options with nuclear energy.  There is no single driver for pursuing nuclear energy in the region.  Factors and motivations include fluctuations in the oil price, growing threats from climate change, increasing demand and various other economic, political and strategic factors. It is also evident that nuclear energy development will not advance quickly across the Gulf or even the wider Middle East. Whilst energy security is an increasing concern in this region, the high upfront capital costs make nuclear energy prohibitively expensive for all but a few states. Ultimately, the economic calculation will be specific to the state and will depend on its existing and future access to energy resources.

The accelerating interest in nuclear power is not unique to the Gulf. It is aligned with a wider international trend, particularly marked in East and South Asia.[5] Developments in the Gulf presage broader global challenges about how to reconcile two intersecting issues: the peaceful uses of nuclear energy and the obligation to prevent proliferation. Analogous to the original geographical dissemination of nuclear weapons, states frustrated by the difficulties in accessing nuclear energy technology may seek to acquire this commodity outside of conventional channels and with indigenous resources. Despite increasingly advanced export controls and counter-proliferation methods, supply chains and technological knowledge are increasingly disseminating with globalisation.  Such challenges are salient ahead of negotiations at the 2020 NPT Review Conference, especially concerning a nuclear weapon-free zone in the Middle East.

[1] World Bank, DataBank, Population estimates and projections (most recent estimates data is for 2017). Available at https://databank.worldbank.org/data/reports.aspx?source=Health%20Nutrition%20and%20Population%20Statistics:%20Population%20estimates%20and%20projections#

[3] Houk, A., Blechman, B. Finlay, B. and Laipson, E. ‘Report on the Workshop: Nuclear Dangers, Nuclear Realities’, Stimson Center (2010). Available at www.stimson.org/content/report-workshop-nuclear-dangers-nuclear-realities

[4] Both sets of data for Figures 2 and 3 were derived by totalling data points for each Gulf state listed in Figure 1. These totals are indicative and for comparative purposes only.

[5] Of the approximately 50 nuclear reactors currently under construction around the world, 35 are in Asia whilst the others are in the US, France, Russia, Argentina, Belarus, Finland, Slovakia and the UAE. See World Nuclear Association, ‘Plans for Nuclear Reactors Worldwide’ (February 2019). Available at www.world-nuclear.org/information-library/current-and-future-generation/plans-for-new-reactors-worldwide.aspx