Macroeconomic impact of Covid-19 on the Arab world

Since early 2020, the world is facing an unprecedented crisis in the form of the Covid-19 pandemic that has resulted in significant loss of lives, pressures on healthcare systems, major lockdowns, and interruption of economic activities, on both the domestic and the global levels. The uncertainty resulting from the pandemic is very high and return to a “new” normal life remains doubtful in the near future. The world is racing during the lockdowns to achieve four basic outcomes that could bring normalcy to the lives of billions of people worldwide: Upgrading healthcare systems; reaching an effective, fast, and economically viable tests for the virus; developing and mass-producing a vaccine; and indeed, discovering a cure. Until the world achieves the aforementioned elements of dealing with Covid-19, the high degree of uncertainty will continue to loom over the global economy.

It seems that the situation could be even more acute in the Arab world. The pandemic was accompanied by a major drop in the global prices of oil – the major export, source of government revenues and contributor to growth for many countries – as a result of the dispute among OPEC+ group members, triggered by Russia’s decision to quit the production cut agreement, and led to a retaliation by Saudi Arabia in the form of increased production.

Taking these events into account, this paper tries to provide some insights on the outlook for the Arab economies in 2020 and 2021, considering the baseline scenario developed by the International Monetary Fund (IMF) for the world economy in its publication, The World Economic Outlook, April 2020. The report suggests that if the pandemic fades in the second half of 2020 then the containment efforts can be gradually unwound. The results presented in light of this scenario could get much worse under more pessimistic scenarios, as the IMF considered three more severe scenarios: longer lockdown in 2020, a new outbreak in 2021, and the combination of longer lockdown in 2020 and a new outbreak in 2021. All of these scenarios result in much worse outcomes than the ones presented in this paper.

In early March 2020, Arab economies faced dual shocks that negatively affected their economic internal and external balances. Many countries announced lockdowns in the face of the global outbreak of Covid-19, and the global oil markets faced turmoil as the OPEC+ agreement on production cap collapsed because of the decision by Russia to exit it and the retaliation by Saudi Arabia in the form of increased production and putting discounts on its oil. 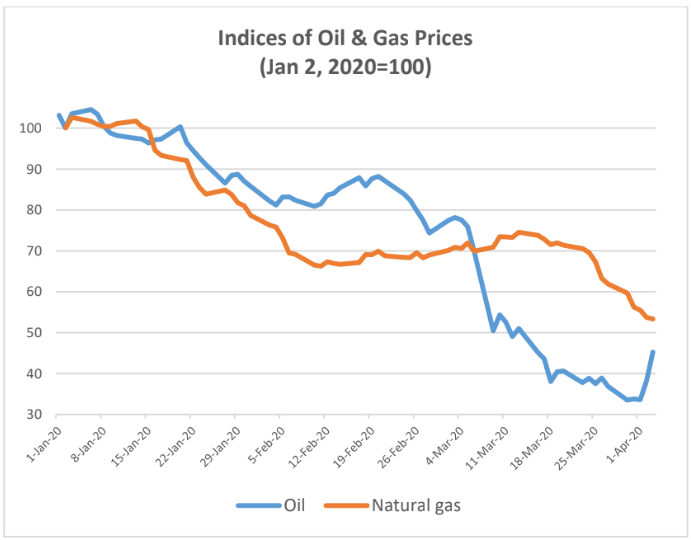 The increase in oil production was accompanied by a major drop in oil demand as a result of the global economy lockdown, a very limited global storage capacity, and a very costly production stoppage for some countries. A combination of these factors resulted in the collapse of global oil prices to reach almost 30 percent of their values at the beginning of 2020.

Meanwhile, the impact of the Covid-19 pandemic was felt severely in the global financial markets. Stock markets collapsed in both advanced and emerging economies and the credit risk spread widened for corporate bonds and sovereign emerging markets bonds alike. The impact on the Arab countries was noticeable, as sovereign wealth funds for oil-exporting countries potentially faced major losses. Some countries, like Egypt, suffered from a major reversal of capital flows as many foreign portfolio investors repatriated investments in light of the higher credit risk, and to cover positions in other markets resulting from losses associated with the collapse of the markets.

The loss of oil revenues, the reversal of capital flows, the negative impact on workers remittances, the slowdown of the world economy and the collapse of activities like tourism and international trade are all possible sources of weaknesses for the majority of the Arab economies during the short term and possibly the medium term.

3. An outlook for the Arab economies

According to the IMF forecasts for the global economy, its major groups of countries, and the major Arab economies, a baseline scenario suggests the possibility of the pandemic fading in the second half of 2020 and containment efforts gradually unwinding. It points to the following scenarios:

The IMF predicts that a scenario of the moderate impact of Covid-19, that ends in 2020, will result in a Global Contraction by -3 percent in 2020, before rebounding by 5.8 percent in 2021. As for the different groups of countries, the IMF predicts that both the advanced economies and oil-producing countries in MENA will suffer the biggest drop and smallest recovery from the Covid-19 pandemic. Meanwhile, both emerging markets and developing economies, and low-income developing economies, would have a lighter negative effect in 2020, and a stronger recovery in 2021. 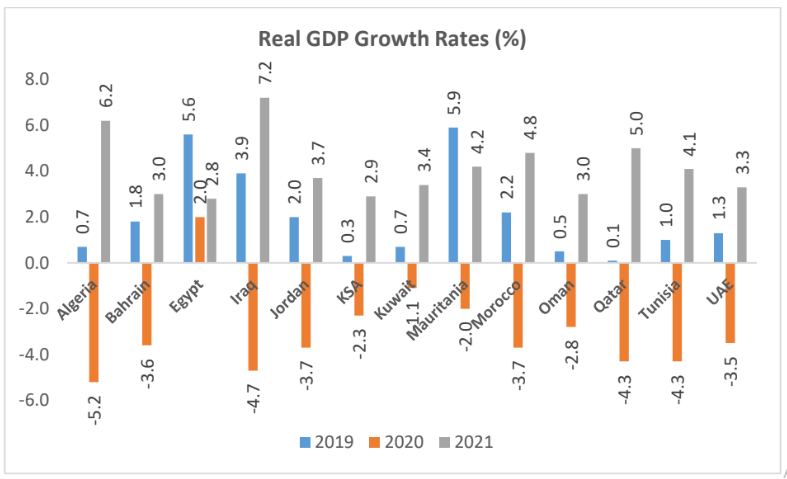 In the Arab world, the impact is expected to be severe for the oil-exporting countries, especially the less diversified ones, such as Algeria and Iraq, while more diversified ones, such as Saudi Arabia and the United Arab Emirates (UAE) will have a smaller contraction in 2020 and a moderate recovery in 2021. Some other Arab countries would also suffer either because of their dependence on a major export commodity (e.g. Morocco and Mauritania), or lack of economic reforms (e.g. Jordan and Tunisia), while the IMF predicts that only Egypt will be able to maintain positive growth in 2020, and moderate growth in 2021, thanks to the success of its 2016 comprehensive economic reform program that ended late 2019. 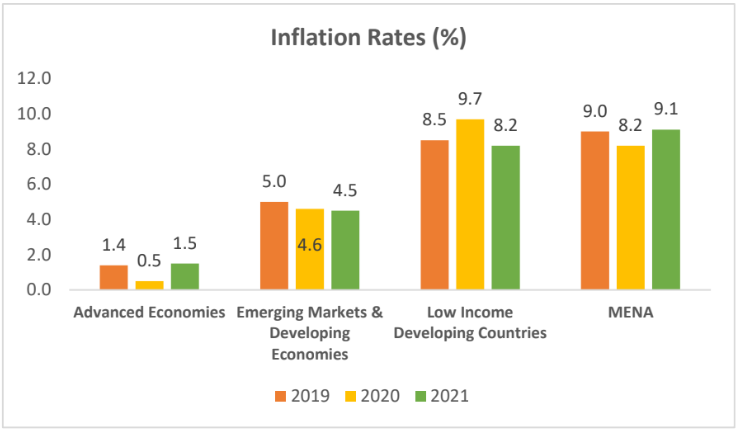 The inflation rates are expected to reflect the slowdown of the global economy to some degree. It is expected to drop slightly in 2020 for the advanced economies, the emerging markets, and the developing countries, and the MENA countries, while it will increase slightly for the low-income developing countries to match the expectations that this group of countries will achieve moderate positive real growth rates. 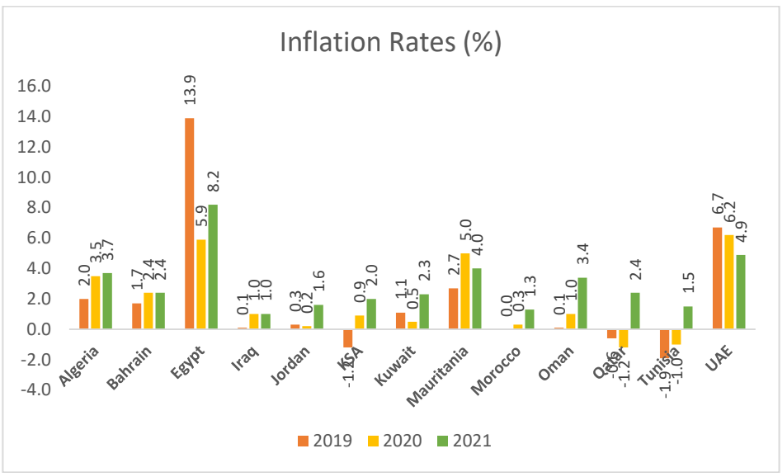 Most of the energy-exporting countries in the Arab world with fixed exchange rates are expected to achieve either negative or positive inflation rates less than or equal to 1 percent (KSA, Qatar, Kuwait, and Iraq). These negative and very low inflation rates could be problematic as it could lead to a major slowdown of the domestic demand. On the other hand, some of the oil-exporting countries with fixed exchange rates (the UAE, and Bahrain) are expected to achieve moderate inflation rates in 2020 that are neither worrying of being high, nor very low to slowdown domestic demand, and accordingly, they have a better chance of faster economic recovery.

As for the non-oil producing Arab countries, Tunisia, Morocco, and Jordan are expected to have either negative or very low inflation rates that could elongate the recovery process. Egypt is expected to have an inflation rate of 5.9 percent in 2020 and a higher rate of 8.2 percent in 2021. While these rates are significantly higher than the ones for almost all the rest of the major Arab economies, they are still within the range of the objective of the inflation rate set by the Central Bank of Egypt at a single digit in the medium term. 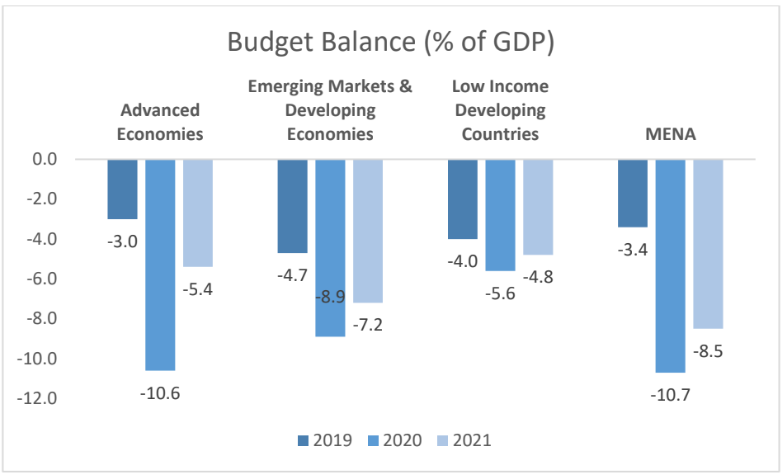 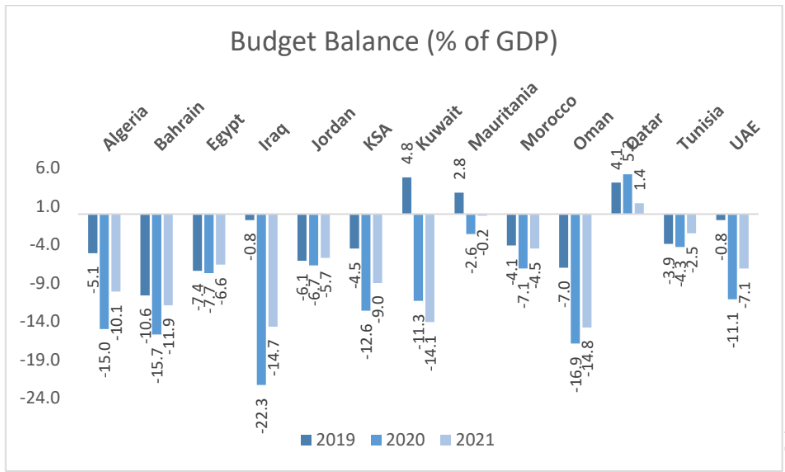 Meanwhile, for the non-oil exporting Arab countries, the social spending, the subsidies, and the possible drop of tax revenues would lead to a higher budget deficit in 2020: Egypt (-7.7 percent), Jordan (-6.7 percent), and Morocco (-7.1 percent). The reversal of the expanding government budget deficits in the future is expected to be a major challenge for the Arab countries in the medium term. 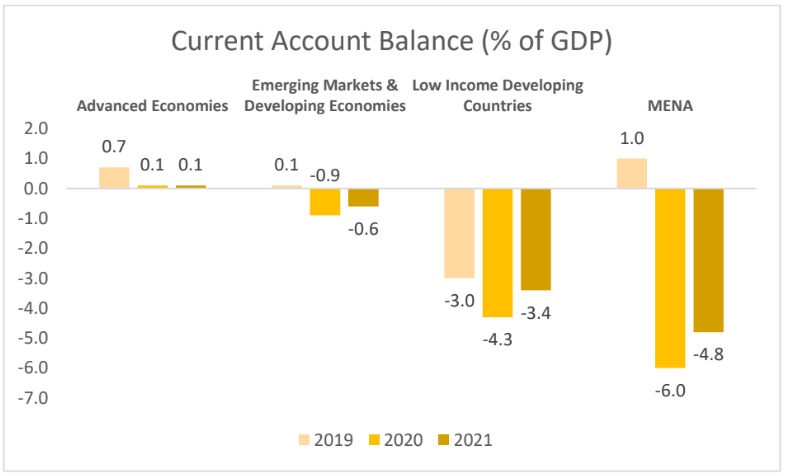 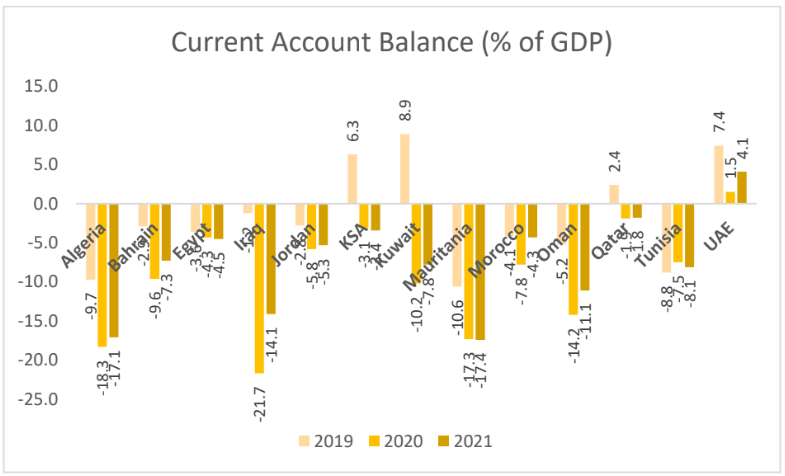 Almost all major Arab countries are expecting a larger than usual, or reversal, to a deficit in the current account of the balance of payments. This is apparent in the case of Iraq (-21.7 percent), Algeria (-18.3 percent), Saudi Arabia (-3.1 percent), Kuwait (-10.2 percent), and Qatar (-1.9 percent). The only exceptions to this trend are the UAE as it expected to be the only country to maintain a surplus of its current account of the balance of payments, thanks to the policies that worked on diversifying the economy. Egypt (-4.3 percent) will also have a moderate deficit very close to the ones achieved before the crisis of Covid-19, thanks to the rigorous economic reform program implemented during the period 2016-2019.

As the Covid-19 pandemic looms over the global economy, the Arab countries are facing a unique situation of twin negative shocks as oil prices are reaching low levels as a result of over-supply, the slowdown in demand, and lack of storage space. The oil-exporting Arab countries in general, with a few exceptions, are facing a major setback in the economic growth, a reversal of the current account balance position from surplus to deficit, potential losses for sovereign wealth funds, and an increased deficit of the overall government financial position.

As for the non-oil exporting Arab countries, the major impact is expected to come from the drop in tourism, workers’ remittances, and the reversal of foreign portfolio investment in some countries, most notably, Egypt. The resulting economic slowdown and higher unemployment rates are pressuring the governments to launch monetary and fiscal stimulus packages, which lead to a higher government budget deficit, and large financing gap, both for the government and for the economy as a whole.

These negative impact could be reversed in the short to medium term if the global fight against the spread of Covid-19 started to reap fruits soon, but the recovery and the restoration of internal and external imbalances could take a long time if the pandemic persists and/or resurge again in the near future.