Radwa Radwan Said
Overview The outlook for the global economy has deteriorated causing an increase in financial market volatility this year. More uncertain global growth prospects and declines in inflation expectations could produce sustained economic and financial weakness as well as intensified concerns about global financial stability. The IMF pointed out in its latest Global Financial Stability Report in April 2016 that the world economy will grow 3.4% this year, up from 3.1% in 2015. But, there are four significant downside risks to the prediction: China; the impact of falling commodity prices on producers; the fragile state of some emerging market economies such as Russia and Brazil; and the possible disruption that could be caused by the US Federal Reserve raising interest rates when other central banks, including the European Central Bank (ECB) and the Bank of Japan, are still providing additional stimulus. Protracted geopolitical risks are indicated by the increasing frequency and intensity of tensions. The conflict between Russia and the Ukraine is still unsolved, and the crisis in the Middle East is deepening. In addition, it is increasingly difficult for Europe to cope with the growing number of migrants. Moreover, before Brexit, the EU was seen as a centre of stability in the international system. Europe is in the process of switching from a source of stability to a source of international instability. The Greek crisis, the migrant crisis, the rise of populism and Britain’s vote to quit the European Union is causing turmoil not only in Europe, but also to the rest of the world. Most economies are still recovering from the financial crisis, and spill overs from the vote could be destabilizing in both short and long term. All these tensions have an unfavourable impact on the economic growth of EU member states, hinder investment and structural reforms, and through the deteriorating market sentiment they pose a financial stability risk that is becoming common. The international environment and financial markets Fears of a second serious financial crisis within a decade have been heightened by the turbulence in markets since the start of 2016. A connected sequence of financial disturbances hit the global economy and the financial system over the past decade, which lead to a weak and fragile financial system and took us back to call for the healthy environment before crisis. This is reflected in the calls for Normalization. There are four main factors that have been driving risk perceptions this year; Worries about global growth and the inflation outlook Increased political uncertainty related to geopolitical conflicts, political discord, terrorism, refugee flows, or global epidemics loom over some countries and regions, and if left unchecked, could have significant spill overs on financial markets. More uncertain global growth prospects and declines in inflation expectations have increased downside risks to the baseline growth forecast, as noted in the April 2016 World Economic Outlook (WEO). In the absence of additional measures that deliver a more balanced and potent policy mix, episodes of market turmoil may occur, tightening financial conditions and eroding confidence. Further shocks and a broader loss of confidence could impart more damage to the global economic baseline and increase the risks of sliding into an adverse downside scenario of persistent disinflationary pressures and rising debt burdens. While underlying drivers of US growth are broadly improving, downside risks remain. Market participants have become worried that higher interest rates, and tighter financial conditions more generally, could materially weigh on growth. Moreover, excess capacity and high unemployment have seen aggregate euro area inflation steadily decline, and there is a real risk that the currency union could face persistent deflation. Other major advanced economies are facing similar difficulties, partly as a result of sustained weakness in oil prices. Deflation increases the burden of debt by increasing real interest rates, which can hamper economic growth. Moreover, deflation may pose difficulties for central banks in stimulating economic growth, particularly if accompanied by reduced inflation expectations. Furthermore, emerging market economies have undergone several severe shocks in recent quarters and its growth continues to slow across most economies. The unfavourable market assessment of inflation and policy interest rate expectations could produce sustained economic and financial weakness in various countries. If the growth and inflation outlooks degrade further, the risk of a loss of confidence would rise. In such circumstances, recurrent bouts of financial volatility could interact with balance sheet vulnerabilities. Risk premiums could rise and financial conditions could tighten, thereby creating a pernicious feedback loop of weak growth, low inflation, and rising debt burdens. Low nominal growth and weakening fiscal positions would increase government debt burdens, with the ratio of debt to GDP rising 4 to 22.9 percentage points above the baseline across advanced economies by 2021, and 3.9 to 15 percentage points across emerging market economies. These negative disruptions to global asset markets, operating through financial channels, could materially worsen economic and financial stability. Uncertainty about China China is now such a big force in the global economy that it inevitably affects the rest of the world. It is the second largest economy and the second largest importer of both goods and commercial services. Given the emergence of China as a key contributor to global growth in recent decades, it is not surprising that the analysis of spill overs from a slowdown in China’s GDP growth has attracted considerable attention over the last few years, with the analytical coverage of its implications for the global economy intensifying during the second half of 2015, noted the IMF. According to National Bureau of Statistics in China, the real GDP growth was 6.9% in 2015, down from an average of 8.5% over 2010-14 and 10% over the previous decade as shown below in (figure: 1). Currently, the economic growth in China continues to slow, as the economy moves towards a consumption-led growth model. 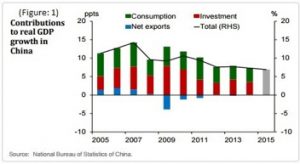