Health security is a priority and efficacy of health system is most important component, an opinion poll by “TRENDS” on post-COVID-19 health security reveals

An opinion poll conducted by TRENDS Research and Advisory, over two weeks, about Post-COVID-19 Future of Health Security showed that health security is a top priority, and the existence of a strong, effective health system is the most important of its components.

The poll was designed to assess the Arab and international public awareness about health security and the transformations it has undergone due to COVID-19, as well as the future of health security after the pandemic. 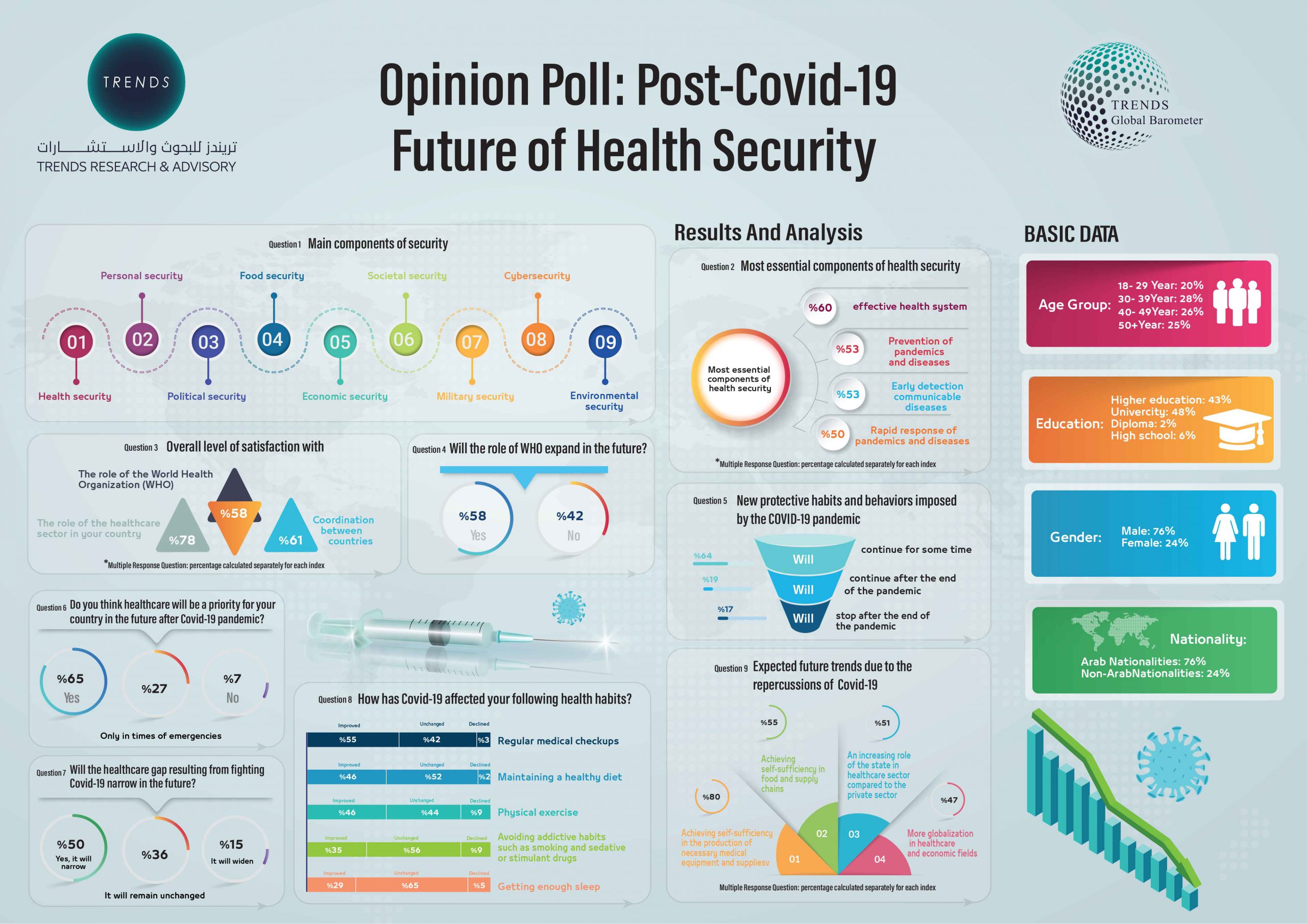 Of total respondents, 60 percent said an effective, well-equipped health system is one of the most important of component of health security, followed by prevention against pandemics and diseases and their causes (53 percent of respondents), early detection and quick reporting of communicable pandemics and diseases (53 percent), and rapid response and containment of the spread of pandemics and diseases (50 percent). The poll covered a random sample of males and females from different nationalities, ages and educational levels. It showed that 58 percent of the respondents were satisfied with the role played by the World Health Organization during COVID-19, while 78 percent were satisfied with the role of health sector in their countries. Coordination among the world countries in general received a satisfaction rate of 61 percent. The findings revealed that 58 percent of the respondents believed that the role of the World Health Organization will expand in the future, after the COVID-19 pandemic, in contrast to 42 percent who believed otherwise. 64 percent of the respondents said the new preventive habits and behaviors imposed by the COVID-19, such as physical distancing, wearing gloves and masks, and continuous sanitation of hands, will continue for some time after the pandemic, 19 percent said it will continue for a long time after the pandemic, and 17 percent said it will stop by the end of the pandemic. Among the respondents, 65 percent believed that healthcare will be a priority for their countries in the future after the COVID-19 pandemic, while 50 percent said the inequality in access to necessary healthcare (vaccines, medical care for patients, masks, ventilators, etc.) between countries will shrink in the future. About 55 percent of the respondents said their general medical check-ups improved as a result of the COVID-19 pandemic. 46 percent said their habit of maintaining a healthy diet improved. 46 percent said their physical exercise improved. 35 percent their avoidance of addictive habits, such as smoking and sedative or stimulant drugs, improved, while 29 percent said their sleeping time improved. The poll showed that 80 percent of the respondent said there will be a drive toward achieving self-sufficiency in the production of necessary medical equipment and supplies in the future as a result of the COVID-19 repercussions. 55 percent said the drive will be toward self-sufficiency in food and supply chains, while 51 percent believed that the role of nation-state in healthcare sector will instead compared to the role of multinational companies and private sector. Finally, 47 percent said there will be more globalization in healthcare and economic spheres. The poll contained questions to gauge public awareness of the transformations taking place in the field of health security, including their awareness about the components of health security, assessment of the role of the World Health Organization in fighting the pandemic, and how to achieve health security, as well as their views about the role of health sector in their countries and the level of coordination among the world countries in general. the percentage of male respondents reached 76 percent, compared to 24 percent of females. Participation according to age was close, with the age group 30-39 constituting 28 percent, followed by the age group 40-49 (26 percent), the age group 50 and above (25 percent), and finally the age group 18-29 (20 percent). Bachelor’s degree holders constituted 48 percent of total respondents, postgraduate degree holders constituted 43 percent, while holders of diplomas and high school graduates constituted 2 percent and 6 percent respectively. More than two thirds (73 percent) of the respondent were Arabs, while foreign nationals constituted 27 percent. Dr. Mohammed Abdullah Al-Ali, CEO of TRENDS Research and Advisory emphasized that the opinion poll executed by the Global Barometer Department about “Post-Covid-19 Future of Health Security” came as part of “TRENDS” keenness to understand the opinion of global community members about an issue of vital importance at both local and global levels. He said the large participation in this poll reflected the level of awareness and responsibility among all respondents, and their understanding of the importance of opinion polls in identifying trends and challenges and developing research-based solutions to them. He added that the findings of the poll would support decision-makers and help them identify priorities and challenges and develop effective solutions to them. He expressed his thanks to those who participated in the poll for providing very useful information by answering the questions which represented the public opinion from all over the community. For his part, Omar Al-Nuaimi, Director General of TRENDS Research and Advisory said the poll was conducted as part of the social responsibility borne by TRENDS, adding that this poll and other ones enhance the global orientation of TRENDS and the general goals it strives to achieve. He explained that TRENDS is a multitasking think tank seeking to boost its research, scientific, consulting and training activities based on Artificial Intelligence. Also, Fahad Essa Al-Mahri, Director of the Global Barometer Department at TRENDS, emphasized that this poll reflected the awareness of TRENDS about the importance of opinion surveys in obtaining reality-based information and providing decision-makers with it to help them face challenges and develop well-informed programs and plans. He pointed out that the findings of the poll showed the importance of health security and the need for joint efforts to fight pandemics and prepare for any emergency in the future.