The UAE Ambassador to Israel participates in a panel discussion with the “TRENDS” Council for Young Researchers Mohamed Al Khaja: The UAE is a global model for supporting and empowering young people scientifically and cognitively

His Excellency Mohamed Mahmoud Al Khaja, the UAE Ambassador to the State of Israel, took part in an open panel discussion organized recently by TRENDS Research and Advisory with the involvement of its young researchers. During the discussion, His Excellency was informed about the views and aspirations of young researchers and their future visions and ideas in support of the UAE’s sustainable development agenda.

His Excellency Mohamed Al Khaja praised the members of TRENDS Council for Young Researchers and expressed his appreciation for their enlightened way of thinking, along with the great role played by TRENDS in enhancing their research and cognitive abilities and honing their scientific skills through various seminars and training courses.

Al Khaja said young people are a key driver of the renaissance, progress and advancement of nations, adding that the UAE has become a global model for supporting and empowering young people and harnessing all national capabilities to improve their way of thinking and enhance their scientific and research abilities. 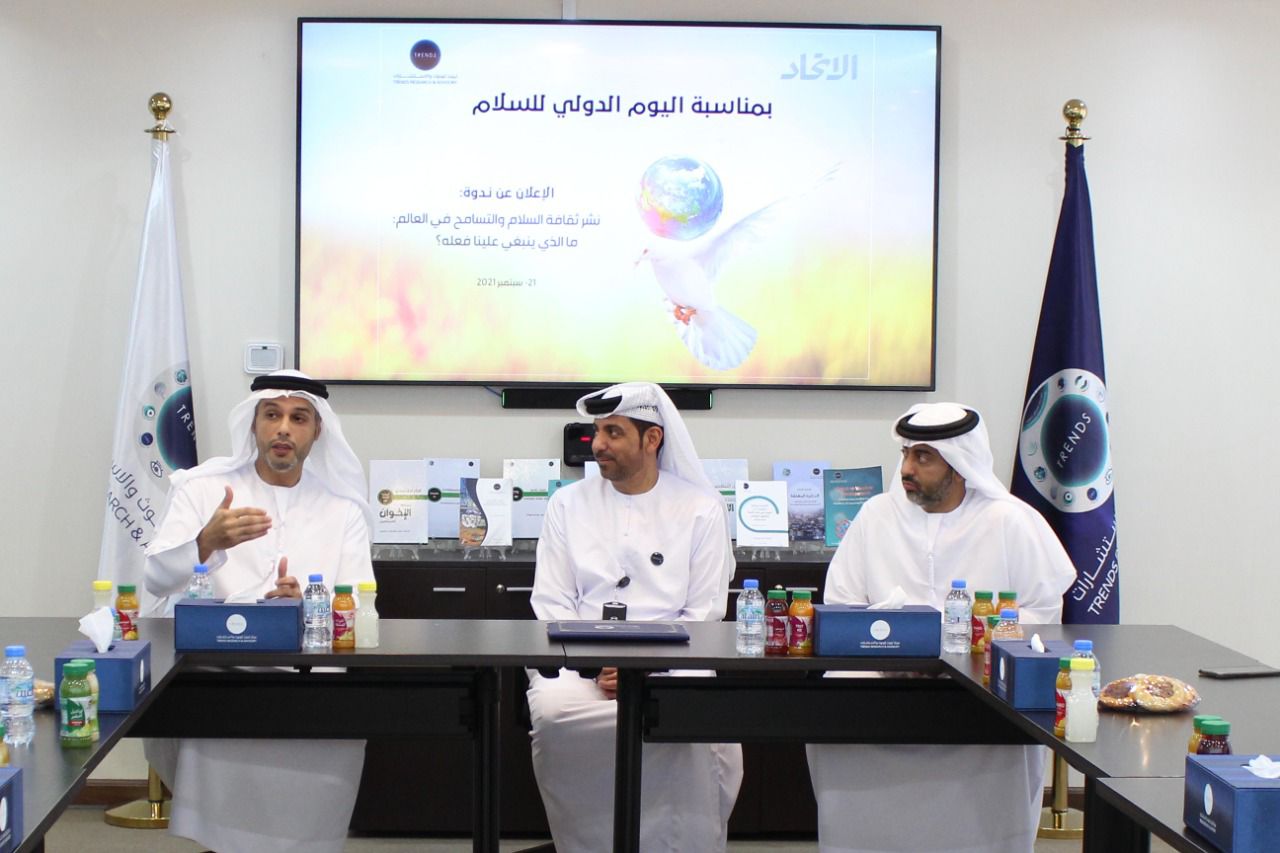 His Excellency encouraged young researchers to utilize the great opportunities offered by the UAE to its people in all fields, and make use of them in such a way as to best serve the UAE community. He advised them to actively contribute to the advancement of the country and its sustainable development journey by striving for excellence in their chosen fields.

His Excellency also underlined the importance for young people to seek and draw inspiration from the bright ideas and prudent approach of the state’s founding father, the late Sheikh Zayed bin Sultan Al Nahyan (may God rest his soul in eternal peace), who was known for his unique visionary thinking.

Al Khaja commended TRENDS’ strategy for supporting young researchers and strengthening their scientific and cognitive abilities, praising the robust scientific outputs produced by research centers that help support decision makers by providing them with information and analyses that reflect young researchers’ views. He stressed the importance of coordination and cooperation between local research centers and their foreign counterparts to deliver the messages of scientific research community, which call for coexistence, tolerance and peace.

The Ambassador said the UAE strives to bring about positive change in the Arab region and the entire world through de-escalation of tensions and conflicts, and dissemination of the values of peace, tolerance, coexistence and acceptance of the other.

On this occasion, Dr. Mohammed Abdullah Al-Ali, CEO TRENDS Research and Advisory, expressed his gratitude for the participation of His Excellency Mohamed Al Khaja in the open discussion panel in which he put forth many constructive ideas and future views, and also praised the great interaction of TRENDS’ young researchers with them.

Al-Ali affirmed that TRENDS, from its inception, has sought to empower and support young people, qualify them scientifically and cognitively, and help them engage in the field of scientific research and preparation of research, studies, and analytical reports that support decision makers.

Ms. Elyazia AlHosani, Head of TRENDS Council for Young Researchers, expressed her thanks to His Excellency Mohamed Al Khaja, Ambassador of the United Arab Emirates to the State of Israel, for enriching the open panel discussion with constructive, valuable, and inspiring ideas. She expressed her appreciation for His Excellency’s support for young people and his encouragement to them to embrace creative and positive thinking that enables them to actively contribute the country’s sustainable development agenda. She added that the new generation is a generation of tolerance and coexistence, and willing to play their full part in spreading the Emirati message of peace across the globe.

Members of TRENDS Council for Young Researchers expressed their thanks and gratitude to His Excellency Mohamed Al Khaja for giving them this opportunity, emphasizing that they possess the scientific, knowledge and research capabilities to contribute to the progress and advancement of the country.