TRENDS Says Farewell to the Riyadh Book Fair Researchers and Intellectuals: TRENDS has Enriched the Event with World-class Scholarly and Informative Content

Researchers and Intellectuals: TRENDS has Enriched the Event with World-class Scholarly and Informative Content

TRENDS Research and Advisory has concluded its participation at the latest edition of the Riyadh International Book Fair 2021, which was held under the patronage of the Custodian of the Two Holy Mosques, King Salman bin Abdulaziz Al Saud, at “Riyadh Front”.

The Center participated in the Riyadh Book Fair with an exceptional pavilion that housed world-class scientific publications and valuable informative series that covered many political, economic, security and technological fields as well as Political Islam movements, which enriched the experience of the event’s visitors with unique cultural content.

The pavilion of TRENDS Research and Advisory witnessed the attendance of very large numbers of visitors of different backgrounds, including officials, researchers, academics, writers, intellectuals, and Arab and international official delegations, to whom the Center presented collections of its latest research and scientific publications.

A Unique and Quality Output

The visitors appreciated the standard of the informative and valuable books and series displayed in the Center’s pavilion at the Riyadh International Book Fair, with many of them commenting that TRENDS’ publications and output are unique and of a high quality, and that they had rarely come across products of a similar caliber from research centers and think tanks participating in regional and international book fairs.

Prince Turki Al-Faisal bin Abdulaziz Al Saud, Chairman of the Board of Directors of the King Faisal Center for Research and Islamic Studies, visited the TRENDS Research and Advisory pavilion in the Riyadh International Book Fair, commended the standard of its scholarly and informative publications, and praised the pavilion’s rich content. During his visit, TRENDS presented the Prince with a set of the latest Center publications.

The pavilion also received an official delegation from Jarir Bookstore, whose members reviewed the pavilion’s contents and acquainted themselves with the Center’s publications and the scientific books. Saleh al-Baidhani, Director of the London-based Al-Arab newspaper office in Yemen, also visited the Center’s pavilion and expressed his appreciation of its scientific and research publications and informative book series.

The pavilion was also visited by a delegation from the Arab Bureau of Education for the Gulf States (ABEGS), whose members praised the standard of valuable books and informative series showcased in the pavilion. Abdel Rahim El-Manouzi, a strategic analyst at the Dutch Ministry of Security and Justice, also visited the pavilion in addition to other researchers, intellectuals, writers and visitors from many countries. 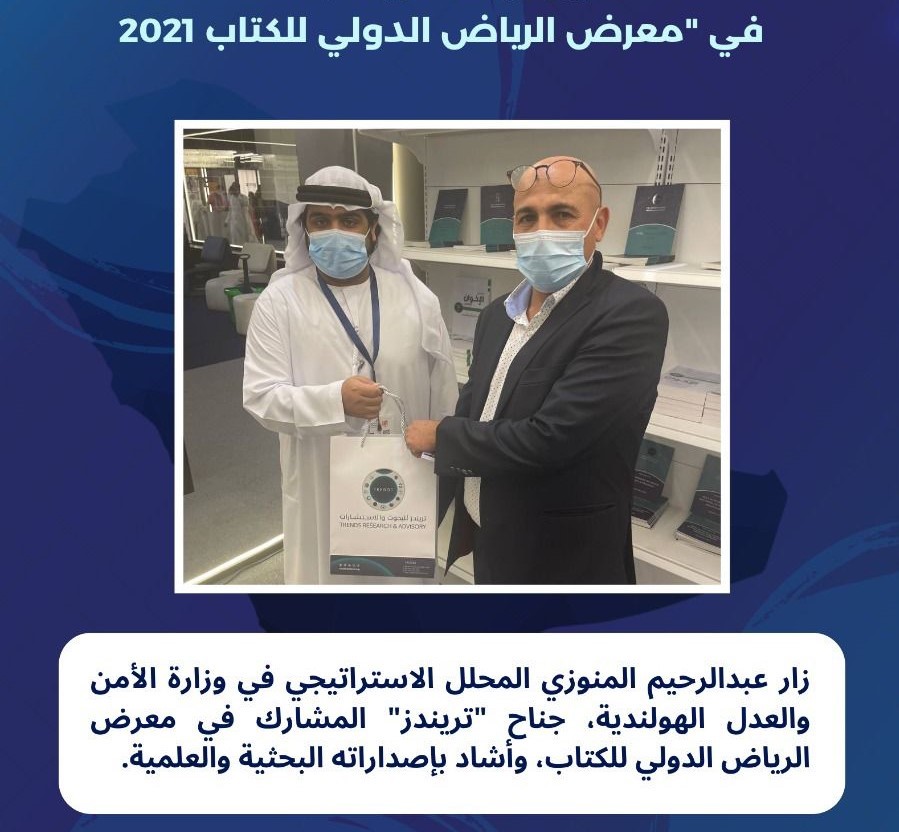 Commenting on TRENDS’ participation in the Riyadh International Book Fair, Dr. Mohammed Abdullah Al-Ali, CEO of TRENDS Research and Advisory, said that the Center’s participation in the Riyadh Book Fair reflects TRENDS’ eagerness to actively participate in Arab and international cultural forums to promote its global vision regarding the importance of these types of cultural activities in achieving convergence between peoples. Dr. Al-Ali indicated that the Riyadh International Book Fair has become one of the most important Arab and international book fairs and constitutes an important cultural platform that attracts intellectuals, researchers and academics in addition to major publishing houses.

Abdel Rahim El-Manouzi, a strategic analyst at the Dutch Ministry of Security and Justice, visited TRENDS’ pavilion in the Riyadh International Book Fair and praised its research and scholarly publications.

Dr. Al-Ali stressed that the Riyadh Book Fair is an important cultural event in the book and publishing industry, as it is a knowledge and cultural window that highlights Arab and international creative production and stimulates cultural participation and commercial cooperation. He added that the Fair serves as a global gateway to the book and publishing sector and a major forum for spreading culture and knowledge and enriching intellectual, scientific and knowledge content.

Dr. Al-Ali stated that the Center's participation in the Riyadh International Book Fair enables interaction with international publishing houses and strengthens partnerships with them. The Book Fair also brought together pioneers of culture, literature and knowledge, thus enhancing the exchange of ideas and visions and perspectives on regional and global issues through scientific publications that keep pace with contemporary developments.

The CEO of TRENDS Research and Advisory indicated that participation in the Riyadh Book Fair aimed to enhance TRENDS’ presence in culturally influential forums to deliver the Center’s research and intellectual message and distribute its high-quality publications and research studies to the largest number of intellectuals and opinion formers.

He pointed out that TRENDS’ various publications are characterized by both credibility and objectivity, and have become a reliable reference for researchers, scholars and academics in the region and the world, given that they are based on the solid, internationally-recognized rules and foundations that characterize scientific research. They also provide in-depth content that foresees the future and actively participates in its making.

Dr. Al-Ali explained that the list of publications with which TRENDS participated in the Book Fair was characterized by diversity and richness, and covered a wide range of issues that captured the attention of the Arab and international community, such as political Islam, sustainable development, technology and artificial intelligence, and tolerance and coexistence.