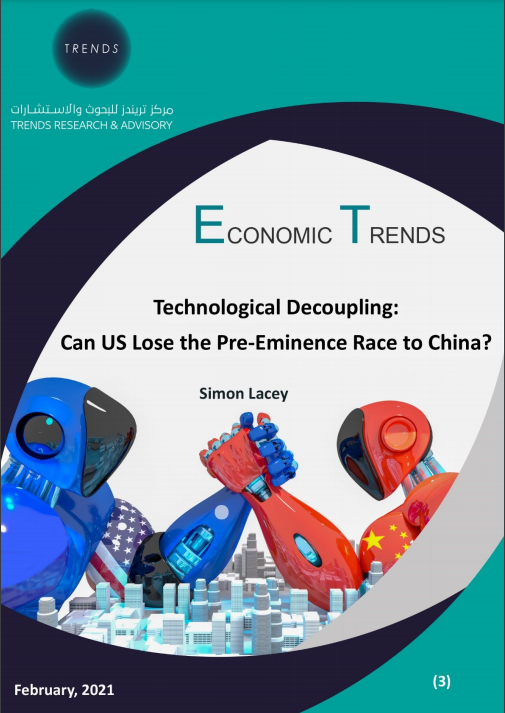 Economic TRENDS (3) : Technological Decoupling: Can US Lose the Pre-Eminence Race to China?

Various efforts by US lawmakers and the executive during the Trump administration to move toward technological decoupling with China betray a deep-rooted and pathological misunderstanding of how the global technology industry works. They also risk backfiring on five counts.

First, it is too little too late. If the United States was serious about policing what it refers to as China’s “innovation mercantilism,” it should have taken steps in this direction almost 15 years ago when China first got serious about increasing “indigenous innovation.” Second, efforts to contain China by cutting off its companies’ access to western technologies and markets are bound to be counterproductive. Chinese firms are sure to gain access sooner or later to these technologies and thereby succeed in their global ambitions anyway.

Third, a policy of uncompromising confrontation only strengthens hawkish elements in China and further undercuts China’s case to embrace deeper market opening and structural reforms. Fourth, technological decoupling undermines the US’s relative position and its technology companies’ ability to maintain pre-eminence across a range of advanced technologies. Fifth and finally, US efforts to contain China for the sole purpose of retaining unchallenged hegemony essentially cedes the moral high ground to the Chinese leadership and undermines the US’s position globally as the so-called “city upon a hill.”

Instead, the new Biden administration should use the US’s still formidable market power and geopolitical influence to both gently coerce and actively incentivize China into shouldering more responsibilities with its newfound economic power. Indeed, the carnage that the Trump administration has wreaked on the US-China relationship and the many trade and investment restrictions imposed on Chinese firms and imports provide a great starting point for the Biden administration to negotiate with China. They should focus on a more balanced and reciprocal relationship of mutual market openness and competitive opportunities for each nation’s firms and their respective domestic markets.