Climate change, group grievances and the quest for survival: An exploration of state fragility in the Sahel

PhD candidate in the department of Political Science and International Relations at the North-West University (Potchefstroom), South Africa

The overarching explanation of conflicts in Africa have centred around several approaches among which one is that greed trumps grievance,[1] especially in face of social injustice. Thus, the financial outcomes of rebellion act as a catalyst for conflicts,[2] as in the conflicts in Sierra Leone, Liberia, and DR Congo. Other scholars see conflicts in Africa within the paradigm of new wars,[3] which have blurred the distinction between combatants and civilians, and even war and peace. These wars occur in the context of globalization and lack of state legitimacy, whereby non-state actors like militias often take advantage of state breakdown to contest for the state – as has been the case in conflicts in DR Congo, Rwanda, Burundi, Sierra Leone and Liberia, to name a few.

The discourse has moved on to embrace the state fragility perspective, where internal weaknesses of the state have made it susceptible to conflict. This is a data driven perspective that looks at the prevalence of group grievances, security apparatus, economic challenges and demographic pressures, among others.[4] However, the academic discourse has been rather hesitant to draw a strong link between climate change and conflicts,[5] especially in Africa. This can be attributed to the dominance of power, interests, and general geopolitical perspectives on conflict in international relations – though a few authors, like Mamdani,[6] have highlighted the centrality of land and water in shaping conflict.

Nevertheless, states in the Sahel like Nigeria, Eritrea, Mali, Burkina Faso, Chad, Niger, Sudan and Mauritania are experiencing internal fragmentation with a proliferation of different groups that are seeking autonomy from the states.[7] Such groups include Tuaregs[8] – largely  pastoralists – whose grievances against states like Mali have been accentuated by drought.[9] Thus, these community-based conflicts are grievance-driven but not necessarily about greed, especially as the groups are not seeking to control the state for their own ends. Such conflicts first broke out in Darfur as pastoralists fought with farmers for water and land.[10] The Sahel conflicts have other interlocutors too, like the Islamists groups, yet these are merely opportunistic as they latch onto local grievances to pursue their agendas.[11] For example, Al-Qaeda and the Islamic State in West Africa have exploited local conflicts in the lake Chad basin and the Sahel to destabilize the region.[12]

This paper thus presents a paradigm shift to understanding conflicts in Africa by focusing on the climate-conflict nexus as a major contributing factor to these conflicts.

Climate change in the Sahel

The Sahel region stretches from Mauritania to Sudan and is home to over 150 million people. In the 1970s and 1980s, it experienced one of the most severe droughts of the 20th century, with a 30 percent decrease in rainfall, attributed to human mismanagement of land resources and the subsequent environmental degradation across the region.[13] Contemporary studies, however, strongly point to ocean warming and air pollution (due to human activity) as having played a major role in the drying of the Sahel. Since the 1970s, temperatures throughout the Sahel region have risen by almost 1℃, a rate nearly double that of the world average, which has led to recurrent droughts as well as frequent floods of greater intensity.[14] Consequently, the extreme climatic variations in the region, combined with unsustainable agricultural practices, has resulted in the loss of arable and pasture land.[15]

Figure 1: Drylands in the Sahel

Naturally, the Sahel region does not score well on the ND-Gain index, which measures a country’s vulnerability to climate change with specific focus on food, water, health, ecosystem services, human habitat, and infrastructure.[18] Chad, for example, is at the bottom of the index with a ranking of 182, while Senegal is ranked at 132, Burkina Faso at 158, Nigeria at 161, Mali at 170, Niger at 176, Sudan at 177 and Eritrea at 180.[19]

Challenges and grievances in the Sahel

The Sahel region continues to face several socio-economic and political challenges, which have led to an increase in grievances against the state. For example, 60 percent of the population in the Sahel is under the age of 25 and vulnerable to challenges such as lack of access to education, unemployment, poverty, and relative deprivation, which have provided sufficient grounds for grievances and radicalization.

According to the Fragile States Index,[20] the region is experiencing growing demographic pressure (see Figure 2). The inhabitants of the G5 Sahel countries alone are projected to double from 83.7 million in 2019 to 196 million by 2050.[21] Thus, the growing link between climate change, high demographic pressure and prevalence of group grievances has made the Sahel more susceptible to resource (water and land) conflicts.

The prevalence of group grievances in the Sahel has left many struggling for survival. Likewise, frustration triggered by lack of life opportunities coupled with the resentment of being deprived of basic human rights has pushed many young people into joining extremist groups. Terror groups – like the Islamic State–West Africa Province (ISWAP) – are presenting themselves as an alternative to the traditional governance model and security architecture, providing essential services that the government has failed to deliver to its constituents. Weak governance in the Sahel due to poor land management, corruption and favouritism,[22] and the failure of states to offer hope and future prospects to their constituents, has opened the door for violent extremist groups to exploit group grievances and entice the local population by offering protection, employment and stability.[23] Thus, the widening gap between the state and its constituents is exacerbating the radicalization of civilians.

Countries with the highest group grievance scores (see Figure 3) are those most fragmented internally and home to the most intractable conflicts – for example, Sudan, Nigeria, Niger, Chad and Mali. Senegal, on the other hand, has a relatively lower group grievance score, which is reflected in the lower levels of conflict and state fragmentation in the country.[24] 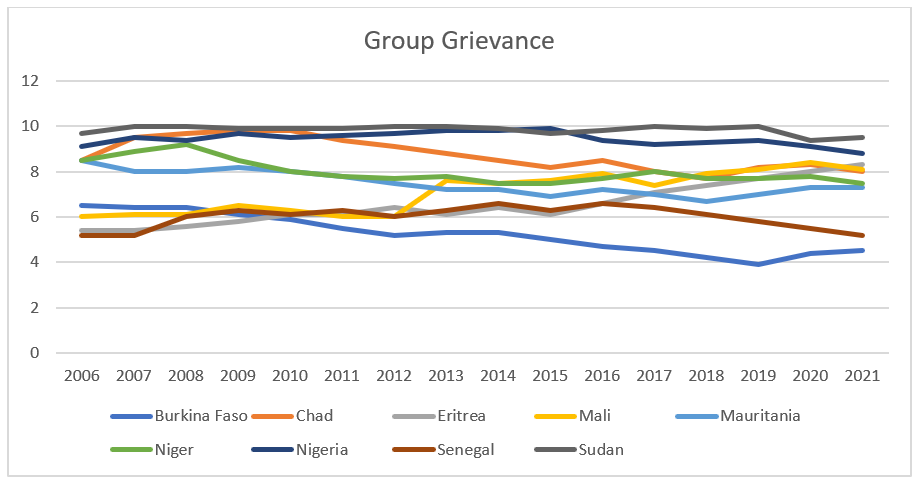 In essence, bad governance has served as a major variable in the nexus between climate change and conflict in the Sahel. This is because there are no well-established mechanisms to deal with group grievances, leaving some states – such as Mali – with “overlapping and competing networks of informal governance.”[25] Moreover, a host of development challenges such as protection from violence and extremism, unemployment, increased inequality, high rates of migration, food security and land tenure security,[26] still persist. Consequently, the reality of Sahelian states is that many of their governments and institutions are underfunded and overstretched. This being the case, climate change serves as a serious threat likely to overwhelm them in the coming years.

The quest for survival in the Sahel has seen some rise in tensions between pastoralists and farmers. Between 2010 and 2020, for example, thousands of deaths were recorded in Nigeria, Burkina Faso and Mali[27] due to disputes over resources such as land and water.[28] With climate change exacerbating the frequency and severity of droughts, competition for land and water has intensified, and has been further compounded by unmitigated migration – especially by Tuareg communities – and the porous nature of the borders. Groups like Boko Haram and ISWAP have operated across the frontier at will, which has led to the displacement of millions in the region.[29] Furthermore, organised criminal networks operating throughout the Sahel have capitalized on weak governance, turning the Sahel region into a key transit point for the trafficking of arms and drugs.[30]

It is the recommendation of the paper that the conflict resolution process not be focused on the Jihadist movements alone. There is also a need to look at the community-based conflicts over water and land, as this is what terror groups latch onto to pursue their agendas. Moreover, there is a dire need to address climate change since it exacerbates resource scarcity, further breeding competition within communities. This in turn leads to group grievances which, when poorly handled, lead to conflicts. The internationalisation of these community conflicts and the porous nature of African borders has also put the region at risk and opened the way for new frontiers of conflict.

At the core of group grievances is state failure to provide equitable structure to utilize resources. Moreover, other factors like sectarianism and corruption have further hindered service provision, leading to populations being susceptible to alternative governance structures from groups like ISWAP.

Overall, the causes and dynamics of conflicts in the Sahel region seem to be going against the norms of greed vs. grievance as well as the new war thesis. The role of climate change has proved foundational to the emerging structure of conflicts, which were initially community-based but have since become regional. The emergence of other actors who are using community grievances to pursue their agendas, and the perpetuation of alternative state structures and service delivery mechanisms, reflects a new dynamic in the conflicts in the Sahel. This dynamic has materialized as a result of the gap left by the state, hence addressing climate change and its challenges is a step in the right direction in combating state fragmentation in the Sahel.

[8] A group of clans affiliated by language and culture, who live a nomadic pastoralist lifestyle, occupying areas in the Sahel and North Africa. See, Andy Morgan, “What Do the Touaregs Want?” Aljazeera, January 9, 2014, https://www.aljazeera.com/opinions/2014/1/9/what-do-the-tuareg-want (accessed August 3, 2022).

[10] Mamdani, Saviors and Survivors: Darfur, Politics, and the War on Terror.

[16] See Crawford, Climate Change and State Fragility in the Sahel.

[26]  See Mbaye, “Climate Change, Livelihoods, and Conflict in the Sahel.”