The pledge by the two largest polluters to reduce and limit their greenhouse gas emission, particularly carbon dioxide by 2030 was hailed by many environmental agencies and policy makers as a step forward against the threats of climate change.

Climate change is a long-term shift in weather conditions caused by greenhouse gases, especially carbon dioxide. Changes in temperature, precipitation, winds, and other indicators are just a few of the signs, scientists’ link to the global warming effect.

Carbon dioxide (CO2) is one of the main greenhouse gases released as a by-product of coal and fossil fuel burning in the industrial world(Fig:1). CO2 emission contributes to the warming climate because it traps in heat around the lower atmosphere. Drastic changes are necessary in order to mitigate the warming trends predicted by climatologists who are otherwise warning of devastating and irreversible changes on food production, ice caps, sea levels and natural habitats worldwide.

Environmental scientists and climate experts attributed the global warming phenomenon and the changes in the earths temperatures to human activity associated with the burning of fossil fuels.  Accelerating climate change in the form of rising temperatures, extreme weather events like damaging storms and intensified hurricane seasons threaten human lives and food supplies. Coastal cities are also affected by the rising sea levels causing land erosion and instability of many natural habitats in addition to devastating economic losses.

The joint agreement between China and the United States coincides with the United Nations Climate Change Conference hosted by the Peruvian government, in Lima, Peru December 2014. The conference precedes the UN conference that will take place in 2015 aimed at achieving a legally binding universal agreement on climate, from all the nations of the world. 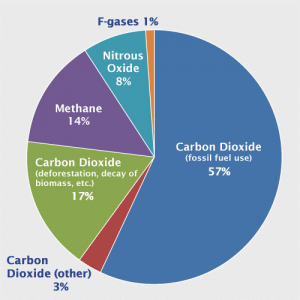 President Obama announced that by 2025, the United States would lower its carbon emissions by 26 % to 28 % below 2005 levels, while Chinese President, Mr. Xi, pledged that China would stop its carbon emissions from growing by 2030. In all, the goal is to move a direction of producing energy from clean sources and impact global efforts to combat the climate change crisis. President Obama believes that the United States aided by China the world’s second largest economy and the most populous nation on Earth as a partner; will continue to lead the world in addressing global challenges like the environmental issues.  The US-China deal will influence other countries around the world to make their own cuts in greenhouse gases.  The United States emits about 20% of total CO2 emissions worldwide while China emits close to 25%; a commitment to place a cap in the next 15 years between the worst two polluters will set higher expectations when world leaders meet to renew global agreements at the climate summit meeting in Paris, December, 2015 (Fig:2). 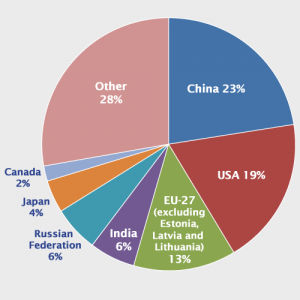 Both the United States and China struggle with air pollution and greenhouse gas emissions, which affects air quality and impact living standards. Placing a cap that limits the emission of greenhouse gasses (mainly CO2 due to coal burning) by the top industrialized countries came as a mutual agreement and places more challenges to enforce tougher regulations and better incentives for the industrial and power producing sectors. The Cap-and-trade system has been enforced in the United States and is proven to help enforce tougher regulations on power plants to lower their pollutant emission.

Some leaders and energy and industry lobbyists and politicians in the United States think that such a deal with China is a disguise for a war on coal and that it will impact the middle class with higher utility rates and ultimately will triggers cuts in the job market; questioning the real economic and political motives that lay behind China’s signing of such an accord.

In China air pollution is a major political issue and air quality in many Chinese cities is very poor and below world health organization standards. China is the world’s largest coal producer and accounts for half of the world’s consumption. Although industrialization lifted hundreds of millions of Chinese out of poverty and created a shift in the Chinese middle class, it also increased urbanization. Specialists in China attribute a quarter of a million premature deaths to health complications as a result of pollution levels, bad air quality and particulate matter. The high levels of smog and the air quality crisis pushed China to announce national abatement targets and an experimental Cap- and- Trade system similar to the one applied in the United States. Soaring energy demands coupled with the international pressure to reduce greenhouse gas emissions have forced many countries to increase their share of renewable energy. China plans to pledge to increase their total electricity generations that come from clean alternative sources.

In the United States a Cap-and-Trade system has been developed to force power plants to adhere to emission allowances and set up annual emission reduction targets. Heavy industrial facilities have been forced to either install expensive emission controls or shut down, because they cannot meet the environmental regulations. The Environmental Protection Agency (EPA) and federal government have successfully implemented the Clean Air Act in addition to other state and national regulations that are proving a success in reducing the usage of fossil fuel, installing stack scrubbers and shutting down several power plants. Industrial plants who cannot meet the quota or targeted caps of allocated emission are given an opportunity to purchase emission allowances under the Cap-and –Trade system.

Cap-and-Trade is an environmental and economic approach to control pollutants, it limits the allowances of gas emissions for industrial and power plants in an effort by the state to meet national standards and aimed at improving air quality.  Scientists using modelling programs believe that one key to saving the globe from the warming effect of the released gases is by limiting the industrial emission. Cap- and-Trade is one system that is found to be effective because of its positive enforcement and economic incentives.

Cap sets a limit on emissions with targets to limit the total pollutants in the long run. Emitters will release a limited quantified amount of pollutants and should have plans to lower their allowances, failure to do so will result in costly penalties aimed at limiting global warming gases.

Trade allows companies to buy and sell allowances with incentives to invest in clean air technology. Those industries successful in meeting the cap and ending up with extra allowances, are able to sell their surplus allowances in the market for financial benefits. On the other hand, companies who are unable to meet the cap are able to purchase extra allowances in order to avoid penalties. These exchanges benefit in reducing global emission. The Kyoto Protocol adopted the Cap –and- Trade program as one way to reduce world carbon emission in addition to the other similar flexible mechanisms to help other countries in achieving their carbon emission limits.

Global warming and climate change has no borders and its effects are catastrophic worldwide.  Combating climate change will need a joint efforts from developing countries setting the role for improving standards, investing in alternative energy resources and enforcing regulations and systems that put a brake on further earth threatening changes.