Nearly 400 years ago, in 1630, John Winthrop, an English aristocrat and a leading figure of the Puritan religious movement, set sail from the Isle of Wight with over a thousand followers for the New World. Before reaching the Bay of Massachusetts, aboard the Arabella, Winthrop summed up their mission in settling thousands of miles away from their motherland as: “We shall be as a city upon a hill, the eyes of all people are upon us.”

For centuries this idea of the American people building a model country for the rest of the world to gaze upon, admire, and emulate has been present in the country’s psyche. President John F. Kennedy quoted Winthrop’s aspirational mantra 60 years ago when addressing the Massachusetts state legislature on the eve of his inauguration, as did Ronald Reagan in several speeches during his presidency. Both Kennedy and Reagan alluded to what they saw as their nation’s destiny to become a beacon of good governance and freedom in the spirit of Abraham Lincoln’s vision in his Gettysburg Address, of a government “of the people, by the people, for the people.”

On January 6, the eyes of all Americans and the rest of the world were on Capitol Hill, but they viewed it in horror, astonishment, and disgust as a mob of thousands of repugnant white supremacists and infamous conspiracy theorists in support of President Trump laid siege to and stormed the home of the US Congress, in what can only be described as an act of insurrection and terrorism.

If Donald Trump’s term in office hasn’t been damaging enough for the role and image of the United States as a world leader and functioning democracy, these events of sheer political hooliganism, inspired by the president and his close associates, sealed the fate of one of the most disturbing presidencies in US history. The images beamed across the globe of, for the first time in US history, homegrown terrorists ransacking the Capitol, one of the most sacred of the country’s democratic institutions, in the face of completely unprepared security forces, will remain in the world’s collective memory for a very long time.

The only surprising element about this unprecedented and violent attack on the heart of US democracy is that anyone could be surprised by it, considering we have had four years of Trump’s constant assaults on every aspect of the democratic system, and his venomous incitements against political rivals and the free media. Those US politicians who expressed surprise at these events are either extremely naïve or feigning innocence out of fear of the possible repercussions for their irresponsible, self-serving and unscrupulous support of Trump, which has been to the detriment of public discourse in the US, and which eventually led to this appalling outburst of violence.

Throughout Trump’s time in the White House, the writing has been on the wall for everyone to see. His outlandish rejection of the election result, followed by his unchecked pressure on officials to overturn it while inciting retribution against whoever disagreed with him, only intensified when the courts threw out his claims of voter fraud. By not conceding the election, saying he will not attend President-Elect Biden’s inauguration and, most alarmingly, obstructing a smooth transition, he created the atmosphere that led to the January 6 insurrection. 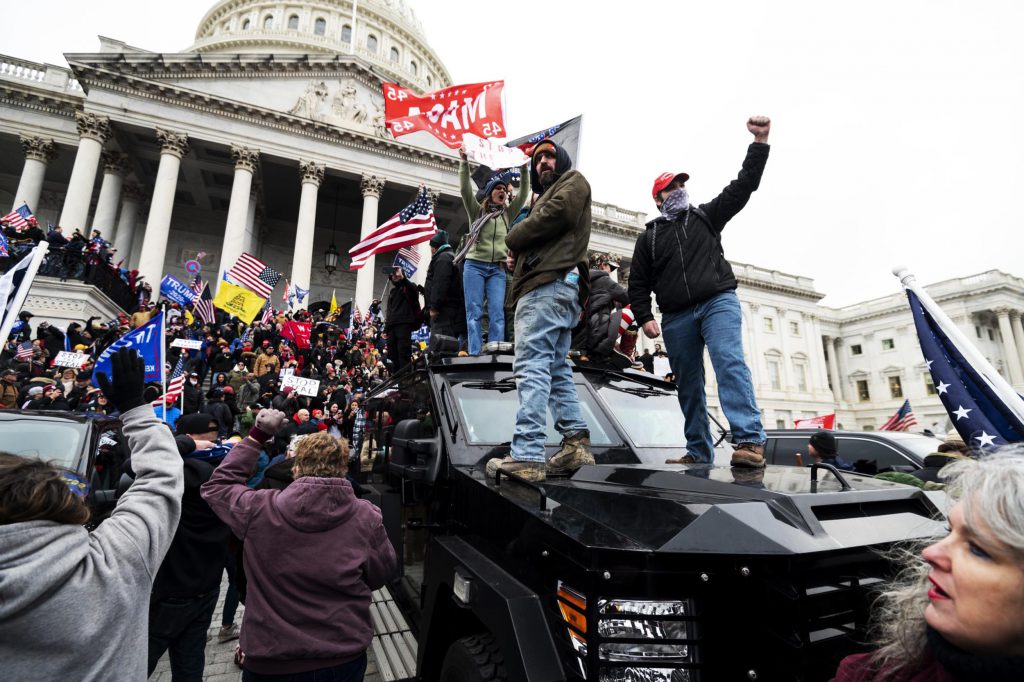 A vote against multilateralism

The US as a superpower was a dwindling commodity long before Trump won the presidency in 2016, but he is both the symptom and accelerator of the decline in America’s international status. Following the terror attacks of 9/11, the subsequent interventions in Afghanistan and Iraq, and the perception that globalization was causing so many blue-collar jobs to move abroad, the prevailing mood among many Americans had turned against multilateralism.

Trump rode this populist, far-right wave successfully enough to win the presidency, and later went on to gain the support of more than 75 million voters in last November’s election despite being the loser. His defeat was mainly due to his colossal failure to adequately address the Covid-19 pandemic, which has so far claimed nearly 400,000 Americans’ lives with almost immeasurable consequences for the country’s society and economy.

The mishandling of the pandemic exposed once again not only a president out of touch but also a country ill-prepared for a large-scale crisis, deeply divided ideologically, and one whose federal system is a recipe for friction and paralysis, leaving the world wondering how an economic and scientific power of such magnitude could have one of the worse records in containing a pandemic.

The assault on Capitol Hill has left a large dent in America’s reputation. Nevertheless, it was mainly an administration’s work that, in its relentless, futile attempts to reverse the election result was ready to stop at nothing. Shortly before the mob attacked, Trump delivered a provocative speech to his supporters in which he urged them to fight harder against what he called the election “fraud,” telling them that “You’ll never take back our country with weakness. You have to show strength. You have to be strong,” and telling them to march to the Capitol and “take back our country.”

This message was reinforced by Trump’s attorney Rudy Giuliani’s statement at the same rally calling for a “trial by combat.” This was a typical far-right populist approach, offering an almost explicit nod and wink to the protestors to go and do whatever they believed necessary to prevent Congress from approving the presidential election results.

International reaction to the Capitol Hill events falls into two main categories. Liberals and America’s allies worldwide are genuinely worried by the deterioration of the social-political discourse in the United States, fueled by Trump and his supporters, and how badly it might affect them. This part of the international community has been biding its time for the last four years. They hoped to see the back of a US president who hampered efforts to contain climate change by unilaterally withdrawing from the Paris climate agreement, who compromised collective security by abandoning the Iran nuclear agreement, and who frequently and viciously criticized international organizations such as the UN, NATO, and WHO while initiating a trade war with China.

As the US has led this camp and its values and served as its main pillar of security since 1945, these allies have watched events in Washington with great concern. Germany’s Chancellor Angela Merkel lashed out at Trump, declaring that his utterly debunked claims about the outcome of the election, as taken up by his supporters, had created the conditions for the outbreak of violence in the American capital, making her “angry and sad.”

France’s President Emmanuel Macron condemned the failed insurrection as un-American. Once a cheerleader for Trump, British Prime Minister Boris Johnson indirectly criticized the outgoing president for hindering an orderly and peaceful transfer of power. The media across Europe was even more scathing in Trump’s criticism while also lamenting the deterioration of American democracy and the dangers that this poses to the world.

The second kind of response came from rivals and those who have scores to settle with the US. For them, this was a moment of glee at the turbulent times their opponent was facing. In Beijing, Moscow, and Tehran, there was a strong sense of Schadenfreude (or pleasure derived by someone from another person’s misfortune).

A senior Russian lawmaker described the insurrection on Capitol Hill as the end of the US as the model for democracies worldwide, while his country’s foreign ministry attacked what it called the archaic US electoral system which “doesn’t meet modern democratic standards, creates the possibility for various violations, and the American media has become an instrument of political infighting.”

Beijing chose to take a swipe at the US media, which called the rioters in Washington a mob while labeling the protestors in Hong Kong who in 2019 had stormed the legislative headquarters as “democratic heroes.” Topping these ironic remarks was Venezuela’s response, where an official statement expressed concern over the stability of US democracy following the riots, a tongue-in-cheek remark mirroring the language employed by Trump regarding the ongoing political crisis in Caracas.

Inevitably, in the wake of the disturbing insurrectionary events on Capitol Hill that capped four chaotic and aggressive years, one huge task of the new Biden administration will be to initiate a process of healing at home while seeking to restore US influence abroad. It is a colossal task in light of the scorched earth left behind by the outgoing president, but not an impossible one.

The world is watching: allies in the hope of a rapid US recovery and return to its leading position following its historic core values; and rivals who would like to see the country continue its mortal decline. All of this makes the coming four years of Joe Biden’s presidency the most crucial in the country’s history, both for the American people and the rest of the world.

Len A comprehensive summary of this disgraceful end to Trumps failed self indulgent presidency.