Cecilia Farfán
When the international media first announced Daesh took control of oil fields in Iraq and Syria several media and government reports emerged estimating the amount of revenue the group could generate. Controlling oil fields, however, does not automatically translate into cash. More importantly, the market for illegally obtained crude is not new and since every market requires a supply and demand, the question is: who buys stolen oil? The answer is far from simple. Thieves use a number of methods, the black market offers various products besides fuel, and distinct ways exist for trading and smuggling the contraband. Given the diversity in the methods, the actors involved, and the products traded Turkey and Mexico are a good starting point for understanding how the stolen crude oil and refined products are marketed internationally. Main Takeaways Turkey and Mexico offer valuable insights including but not limited to: The cases examined here represent only a small fraction of where and how stolen oil products are globally traded. Turkey It has been widely reported that Daesh sells stolen oil from western and northern Iraq as well as eastern Syria to complement revenue streams that include kidnappings, an extensive protection racket, and illegal sales of antiquities. A less discussed question, however, is who buys oil from Daesh? As detailed in the February 2015 report by the Financial Action Task Force, Daesh mostly swaps or sells crude oil and primitively refined products to middlemen who use smuggling networks that operate across border regions.  Interestingly, these networks did not emerge as a result of Daesh and have been operating long before Al-Qaeda in Iraq came into existence. Lack of employment opportunities and public services such as education and health services have bolstered smuggling networks as an understood form of livelihood—not illegitimate or illicit—but an indispensable economic activity that includes basic goods as well as drugs and people[i]. Understanding who buys stolen Iraqi and Syrian oil therefore requires identifying the incentives for operating contraband networks that cross into Turkey. Anatolian Prerogative: Cheap Fuel For 2014 the Turkish government estimated losses of $1.72 billion for gasoline dealers and $862 million in tax revenue due to smuggled oil from Iraq and Syria. As noted by analysts, heavy taxation on fuel prices—gasoline and diesel—has produced important price differences between Turkey and its neighbors resulting in profitable opportunities for smuggling that, by some estimates, meet one-third of the national oil demand. In August 2015, a liter of gasoline in Turkey sold for $1.69 compared to approximately $0.86 in Iraq and $0.45 in Syria ($0.77 in the U.S.). The chart shows a comparison of diesel prices. According to a government official of the Turkish Department of Anti Smuggling and Organized Crime the smuggled fuel—generally sold at gas stations that sell cheaper diesel to truck drivers and farmers—is introduced from Iraq in several ways: 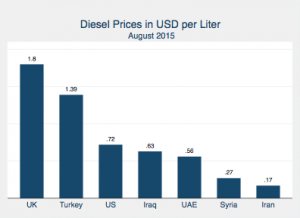 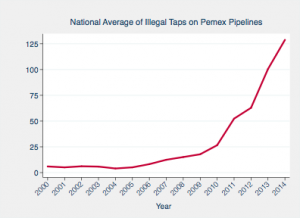 The Bread and Butter: Gasoline       Taps are placed on pipelines to extract gasoline with varying levels of dexterity. Less advanced crooks tap pipelines and occasionally damage them creating shortages by forcing Pemex to shut them down while they are repaired. In contrast, sophisticated thieves use tapping machines that allow plugging live pipelines without interrupting the service, increasing the difficulty of locating and suspending them along a network that extends over 14,000 kilometers. Former and current Pemex employees install tapping machines for third parties who pay up to $6,000 dollars for a single tap—a considerable amount given that after taxes households have an average yearly disposable income of approximately $13,000 dollars. In February 2015, Pemex announced that it would no longer transport refined products through its pipelines to deter theft yet shortages persist. Furthermore, pipelines do not transport refined products 24/7 which suggests collusion from employees who inform thieves of the times when the pipelines are used in order to steal products. Pipeline theft, though, is only the beginning of a complex chain that also involves gas stations. In its most basic form franchise owners of Pemex service stations tinker gas pumps that sell lower amounts of gasoline than the one marked by the pump effectively stealing from customers who pay for gasoline they did not get. The problem is so widespread that online newspapers and even smart phone apps allow customers to verify whether a particular service station sells accurate amounts. 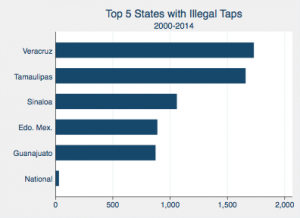 In more elaborate schemes, franchise owners might steal gasoline from pipelines and then sell it at the service station. If combined with the tinkered gas pumps, franchise owners obtain more income that is not subject to regulations and is easy to conceal due to the cash-intensive nature of the business. Even though since 2005 Pemex installed monitoring software that compares legitimate purchases made by franchisers and volumes sold to customers at gas stations, audits to Pemex revealed that franchise owners regularly ‘unplug’ from the system in exchange of a monthly payment to Pemex personnel in charge of monitoring. The corruption within Pemex and the liquidity of the business provide ideal conditions for drug trafficking organizations to use service stations for money laundering. By employing front companies proceeds from crime are deposited into bank accounts linked to service stations effectively concealing the illicit origin of the money and passing the earnings as legitimate. Between 2005 and 2014 the Office of Foreign Asset Control (OFAC) under the U.S. Department of Treasury designated 19 gas stations operating in Mexico as part of its counter-narcotics sanctions program prohibiting its citizens and companies from engaging with the listed entities. Still, it is highly likely than more than 19 gas stations are used for laundering money given that the top five states with illegal taps are also states with considerable organized criminal activities. The Money Maker: Natural Gas Condensate The Burgos Field located along Mexico’s northern region, with an area similar to that of Ireland, is an important producer of natural gas with a daily output of 1.2 billion cubic feet. When natural gas is extracted a light liquid known as condensate can be recovered. Condensate has a low content of contaminants making it easy to refine into high-value oil products including gasoline. As detailed in the complaints filed by Pemex in the Southern District Court of Texas in 2010 and 2011 individuals and companies in the United States knowingly purchased condensate illegally obtained by drug trafficking organizations operating in the Burgos Field. Pemex has estimated that between 2006 and 2011 up to 40 percent of its total condensate production was stolen. Before the energy reform of 2013, Pemex and its subsidiaries were the only entities allowed to produce, export, and sell Mexican hydrocarbons such as crude oil, natural gas, and condensate among others. To export hydrocarbons, Pemex used transport companies that would deliver hydrocarbons directly to U.S. refineries. These transports were the only legal way to obtain condensate from Mexico to use in the United States and since 2006 Pemex did not award any contracts to transport condensate across the border, any of this product that entered the U.S. from Mexico did so illegally. El Golfo and Los Zetas two of Mexico’s best-known drug trafficking organizations stole condensate from the Burgos Field in the following ways: Once the drug trafficking organizations had control over the condensate they sold it to transport companies with otherwise legitimate contracts with Pemex that transferred it to different tanker trucks meeting the specifications required to pass Mexican and U.S. customs. These transport companies used forged export documents identifying the contents as legitimate cargo from Pemex and bribed customs officials on both sides to facilitate its crossing. Importers in the U.S. received the tanker trunks with condensate that was stored and/ or sold for profit to end-users such as Murphy Energy and BASF Corporation. Two central lessons can be drawn from this case: [i] Bozçali, Firat. “The Illegal Oil Trade Along Turkey’s Borders”. Middle East Report, No. 261, 2001.ii