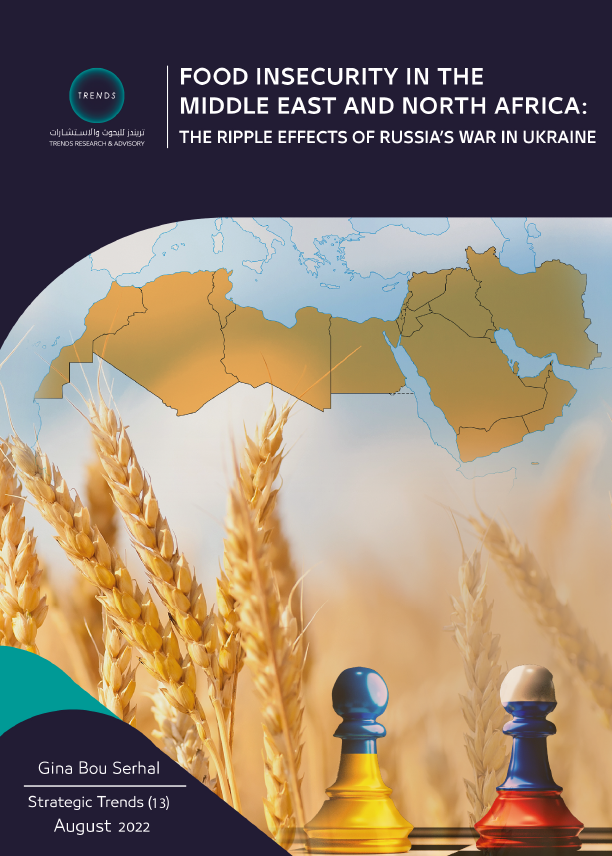 Food insecurity in the Middle East and North Africa: The ripple effects of Russia’s war in Ukraine

At a time when the global economy continues to grapple following two and half years of financial stagnation due to the COVID-19 pandemic, the Russia-Ukraine war will only continue to undermine economic recovery around the world.  With oil prices and global food inflation on the rise, the prospect of further economic instability and increasing global hunger may run the risk of provoking political and civil unrest.

Additionally, Russia’s war in Ukraine has cast a spotlight on the global dependency of food imports – particularly wheat – from the two Eastern European nations.  Prior to the war Russia and Ukraine accounted for one third of the wheat imports around the globe.  Yet as the conflict continues to intensify, Russia’s blockade of the Black Sea has further deepened global food supply disruptions as the passageway accounted for nearly 98% of Ukraine’s wheat exports prior to Russia’s invasion.

In addition to serving as the world’s ‘breadbasket,’ Ukrainian wheat accounts for nearly 40% of the World Food Program’s (WFP) grain supply.  For countries who rely on international aid to feed its undernourished populations, the war in Ukraine jeopardizes the support capabilities of relief agencies to help alleviate world hunger.  For example, nearly 19 million Yemenis are categorized as ‘food insecure’ – meaning they are unable to acquire reliable access to affordable, nutritious food due to unavailability or lack of financial resources.  The current global increase in wheat prices alone has increased the WFP emergency food assistance budget by $23 million per month only to compromise the ability of such aid agencies to cope with food insecurity in Yemen and beyond.

Considering bread is a vital, daily staple in countries across the MENA region, many states subsidize wheat imports for their populations – typically at a loss for the government.  The subsidized price of bread is considered a ‘social contract’ between the government and its people, often used to maintain social stability.  For instance, the price of a local baguette in Tunisia has remained the same cost for nearly decades.  Yet both Tunisia and Egypt in the past have experienced deadly ‘bread riots’ at the mere suggestion of subsidy removal by their governments with such proposals often backpaddled to avoid conflict and violence.

Lebanon, who was already facing dire economic collapse, imported nearly 90% of its wheat from Ukraine and Russia prior to the war.  As of May 2022, domestic food inflation rates in Lebanon reached 364% with the UN estimating nearly 82% of the population to be currently living in poverty.  Lebanon – similar to Yemen relies significantly on international aid to feed its growing disadvantaged population, particularly the over two million Syrian and Palestinian refugees currently being hosted by the Lebanese government.  All the of component needs for protest and upheaval lay simmering in the street of Lebanon as bread shortages, food inflation, unemployment, and currency devaluation continue to hit every corner of the country.

The Middle East and North Africa is highly susceptible to food insecurity as a result of global supply chain shocks considering the region imports nearly 50% of its food products from abroad – even more so in the GCC with various states importing nearly 90% of their dietary requirements.  Yet the GCC states have far better weathered the current global food crisis due to the increase in oil prices which have helped cushion the region’s petrostates from rising food costs.  The UAE has long prioritized food security, specifically self-sufficiency through adaptive agricultural solutions that are tailored for the regions’ hot and arid climate – a factor that has long forced the MENA region to remain reliant on imports from abroad.  In addition, the adverse effects of climate change in the region including droughts, extreme flooding, and rising temperatures have progressively hindered domestic agricultural production to meet the demands of local consumption, ultimately compelling the reliance on imports to ensure domestic nutritional needs are met.

If Russia continues to maintain supremacy over the Black Sea, global food security will continue to remain in peril, particularly as much of the world relies on wheat and grain imports from the region.  The Russian-Ukraine war should act as a wake-up call for governments around the globe to prioritize self-sustainable food systems while enhancing regional food cooperation.  As we live in an era of rising global nationalism, averting food protectionism should remain a top priority for the international community – above all to insulate the world’s most vulnerable populations from growing food insecurity and starvation.

Gina Bou Serhal is a Researcher in the Strategic Studies Department at TRENDS, Research & Advisory.  Mrs Serhal has a Masters degree in Diplomacy and International Affairs from Zayed University, Abu Dhabi UAE.  Her research interests include Middle East geopolitics with a particular interest in Lebanese & Iranian politics as well as the Palestinian conflict.  Gina also has a strong interest in the American political system and US foreign policy.