Latin America, Israel, and the Gulf: Trade and Security Amid Global Uncertainty

Despite economic and political upheavals in Latin America and the Middle East and unceasing crises in democratic governance worldwide over the 2010s, there are vital continuities in relations between the two regions. Latin American choices continue to point at the existence of “regional tendencies” toward the Middle East that persist beyond political alternations, the most visible being in trade and the defense spheres. These can be examined by identifying choices with Israel and the Gulf countries. Overall, the evolution of Latin America-Middle East relations illustrates how global political shifts can imply a growing and more independent role to regional actors and the rise of more region-specific dynamics.

A complex process of redistribution of global power has unfolded in recent years. Noticeable developments include a relative decline of the United States’ global influence, the accelerated ascent of China as a great new power, the re-emergence of an assertive Russia, and an uncertain Europe. This scenario has opened new windows of opportunity for Israel and the Arabian Gulf countries’ presence in Latin America.

The governments in both regions seek new trade destinations, new suppliers of resources, or new sources — or outlets for — investments. According to the International Trade Statistics Database (uncomtrade), official (government) database, countries like Mexico, Brazil, Argentina, Costa Rica, Chile, or Peru have registered a relative growth in trade flow since 2008, albeit with some slowdowns in different years. 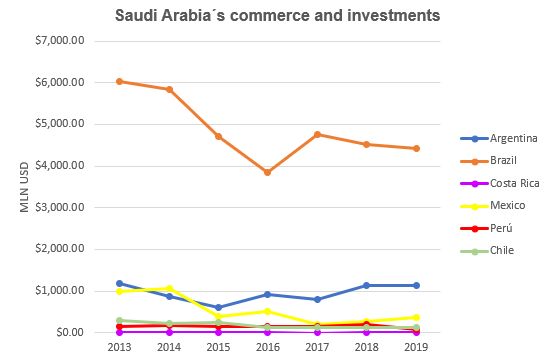 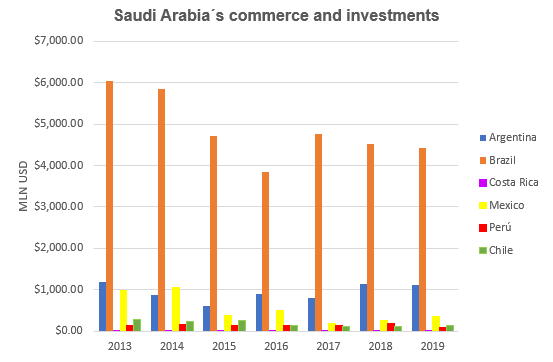 In other words, there have generally not been dramatic changes in trade over 2010, despite unceasing economic crises. Slowdowns primarily relate to the regional turmoil following the massive widespread protests in some Arab countries and domestic difficulties in some Latin American countries.

The plunge in oil prices since 2014 reinforced the Gulf countries,’ especially the UAE’s determination to diversify its economy and explore new opportunities beyond traditional partners. The UAE has become the leading destination for many Latin American countries’ exports. One robust signal of the UAE’s interest in expanding relations with Latin American countries is seen in the acquisition of docks in Peru, the Dominican Republic, Argentina, Brazil, and Chile. Mexico and the UAE signed an Agreement for the Promotion and Reciprocal Protection of Investments and 12 other legal instruments and interinstitutional agreements. Both countries also agreed to improve the connectivity of commercial flights between the two countries and the abolition of visas.

Additionally, Mexico spearheaded a strategy for the “national and international promotion of Mexican products with Halal Certification 2015-2018.” A 2019 Argentina-Saudi Arabia Mixed Commission has also made progress. Energy has been at the forefront of many countries’ relations with the Arabian Gulf, particularly Qatar, Saudi Arabia, and the UAE. Costa Rica and Mexico, for example, discuss renewable energy issues occasionally. Similarly, Argentina and Saudi Arabia have established channels of communication in the nuclear field. Cuba’s attempt to reconcile past aspirations for national liberation with more recent shifts toward a free market has led to their negotiating mechanisms of cooperation in renewable energy projects and hydraulic infrastructures, among other areas. However, trade relations with Israel remain below their potential even though some countries, such as Mexico, Brazil, Colombia, and Peru, have registered growth. 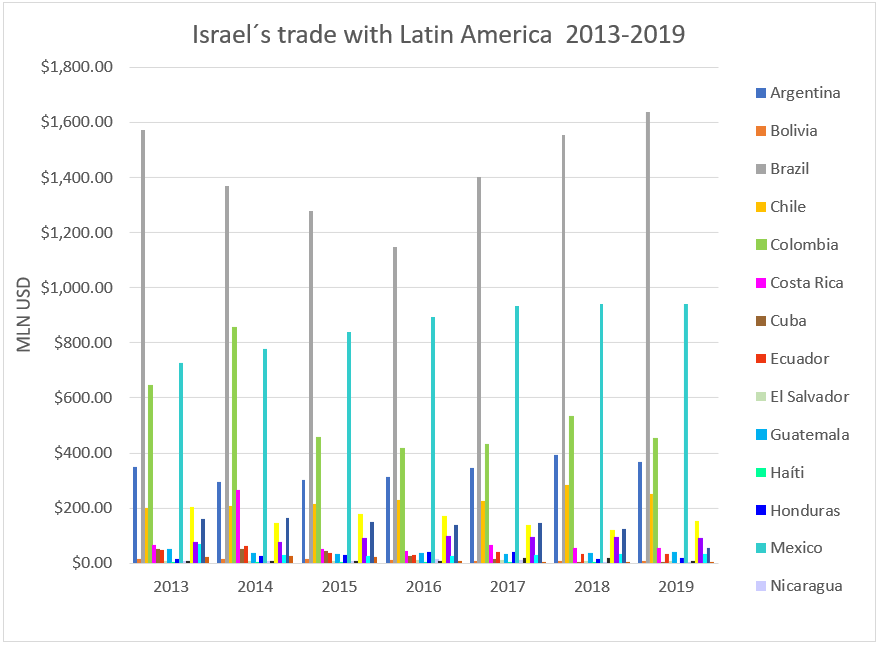 The free trade agreement between Mexico and Israel (2000) and the Alianza del Pacífico can be seen as evidence of Israel’s assertive policies toward Mexico and Latin America and the Caribbean in general in the past decade. With Israel, cooperation and investments are evident, particularly concerning Israel’s irrigation technology. In Mexico, Israel has introduced private sector agricultural innovations that boast technologies that address water scarcity and flooding.[1]

Indeed, Latin America became an attractive destination for Israeli investors. The Israeli government is endorsing long-term investment channels in Latin America to take advantage of these developments. One of the most recent initiatives includes investing Israeli capital — in retirement savings — in regional infrastructure projects in partnership with the Inter-American Development Bank.[2] 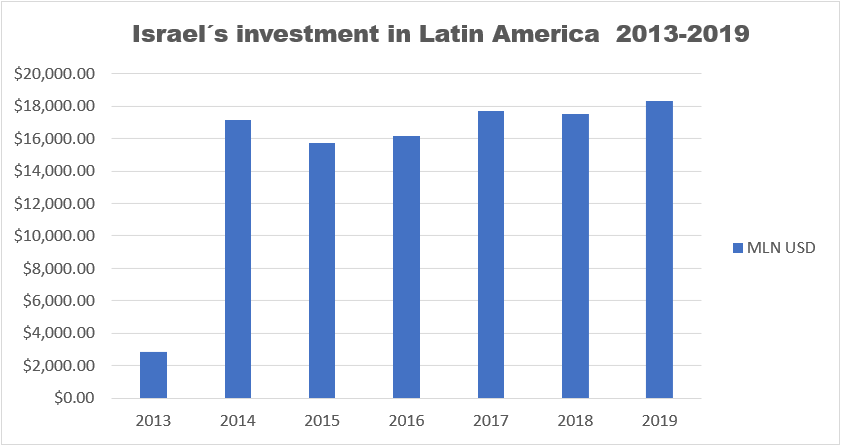 Overall, the traditional international trade exchange pattern of Latin America has involved the export of commodities in return for manufactured products, technology, and capital. This dynamic has not been altered by either Israel or the Arabian Gulf countries. With the bulk of trade being minimal, more elements are needed to weigh to assess its implications for Latin American countries’ economic and technological aspirations.

Furthermore, the material terms of Latin America-Middle East relations have remained relatively constant regardless of the governments being of the left or the right of the political spectrum. This relationship is further reinforced by the enduring diasporic and economic connections with Israel and the Gulf countries. Indeed, at the social level, some key diaspora organizations from Arab and Jewish communities and religious authorities have found fertile ground to interact with Latin American administrations. Thus, for example, agro-industrial groups in Argentina, Chile, and Brazil advocate for good relations with the Arab markets and the Gulf Cooperation Council countries; others, such as the textile industry, are working to contain criticism of Israel.

The influence of diaspora communities, big businesses, religious organizations, chambers of commerce is often determined by their political networks. Therefore, political motivations can also be found behind this continuing surge of relations with Gulf countries and Israel: strategic repositioning, the need to attract political support for a leader’s cause or regime, or achieving ideological affinity. These motivations may include a personal vision of international affairs adopted by new political or economic leadership.[3]

Security concerns have coexisted with political links and economic ambitions. Israel stands to benefit from closer economic ties with Latin America, not least due to its ability to leverage demand for security technology. Indeed, security is one of the leading aspects in cooperation with Israel, and to a lesser extent, with the UAE. Colombia, for instance, has sought expertise from the Israeli Defense Ministry on mitigating the threat of landmines and other explosive devices in the wake of the 2016 peace agreement between Bogota and the Fuerzas Armadas Revolucionarias de Colombia (FARC) guerrilla. Prior to this, a leaked cable indicated that Israel provided Bogota with military training, advice, and arms to confront the FARC.[4]

Another illustrative case is Israel’s presence on the Mexican-American border. This cooperation continues unabated since 2019 and seems to be seen as a more urgent task given the links between Israeli and Mexican transnational organized crime mafias. Also, during Prime Minister Benjamin Netanyahu’s visit to Mexico, in September 2017, President Peña announced that Israel would assist the US and Mexico in promoting investment and development projects in the so-called Northern Triangle of Central America to curb migration to the US.[5] For their part, Brazilian officials have engaged in talks with their Israeli counterparts to acquire drones with facial recognition to pursue criminal suspects. At the same time, Chile bought Israeli Hermes drones to patrol the Bolivian and Peruvian borders in their fight against drug trafficking.

Thus, Israel stands out in several cases in terms of scientific and technical cooperation applied to national and public security.  The UAE comes next, as the cases of Mexico and Colombia demonstrate. Mexico’s cooperation with the UAE and Kuwait in police and intelligence is another example. With Israel, progress was made in police training and the effective use of technology. The UAE is a client for Colombian arms, especially air/land bombs.[6]

A factor behind the continuities, and in some cases deepening, of links between countries in both regions might be their shared perception of change about the role of external allies (i.e., expectations about the United States). Such perceptions could have prompted regional actors to seek new means of boosting their security and autonomy.[7] Besides, the development of security-military relations and reflecting the evolution of civil-military relations in Latin American countries also shows the importance of defense and security matters in their relationship with Washington and their impact on their ties with the Middle East. In this regard, security and intelligence relations might be linked to regional dynamics, specifically the deficit in regional leadership in Latin America. Indeed, it could be hypothesized that, as regional dialogue has diminished significantly over almost a decade, the armed forces in Latin America have been freed from the peer-to-peer control they were under throughout the democratic transitions period (1985-1990s).

The ongoing relations between the Arabian Gulf states and Israel with their Latin America counterparts constitute a distinctive example of the multiple forms and mechanisms that the reinvention of “the South” takes [8] and its impact on the evolution of the contemporary international system. The Covid-19 pandemic has presented opportunities and challenges. On the one hand, new channels of cooperation emerge. Thus, for example, the UAE donated protective equipment for health personnel to the Organization of American States.

However, the economic effects of the pandemic are likely to exacerbate many of the factors driving political unrest. Although it is not clear yet in which way or direction this factor may concretely affect their foreign policy options toward one another, the evident lack of more effective and sustained regional cooperation between the Latin American and Middle East regions, along with the impact of individual personalities and (geo)political battles, might reduce the possibilities of a sustained, joint, contribution to multilateral initiatives.

In any case, the evidence shows that Latin America’s relations with the Middle East include phenomena of both withdrawal and reactivation.  In hindsight, specifically concerning the Arabian Gulf nations and Israel, these relations continue despite global political and economic shifts and crises and domestic predicaments. The causal primacy can be placed on systemic/regional constraints and opportunities. Domestic level actors and concerns of leaderships have filtered these factors in such ways that have led to the growth of trade relations and the extending of intelligence and security cooperation.

Recent evolutions like those outlined above may point at the existence of a LAC “regional tendency” or “regional tendencies.” Their forms and consequences are still to be identified, defined, and explained in more depth. Nonetheless, and the gap between the declared purposes and their actual results, it is a fact that Latin American countries are managing those relations differently than before, particularly on the disconnection between trade and politics in ties with the Middle East, and in adopting more ambitious bilateral approaches. As such, the actions of businesspeople, substate level officials, diaspora communities, and religious groups in foreign policy underpin the importance of Latin America’s traditional diplomacy in defining long-term strategies.

Countries from both regions have created “interdependencies” in the economic and defense spheres that may resist domestic electoral changes. This orientation will likely continue because these projects have the support of a broad base of interest groups.  But an acknow­ledgement of the need for more attentiveness to local/regional perspectives also raises the question, from a Latin American perspective, about whether these relations with non-traditional external partners are symmetrical compared to those between the United States, Europe, or even China.

Ultimately, the point is whether Latin America can advance its agenda and interests, if these relations promote a more balanced international system or if they reproduce on a smaller scale already established asymmetrical relations. [9] These are significant issues, especially in light of controversial cases such as the acquisition by Qatar of thousands of hectares of land in the Río Negro province of Patagonia and the negotiations between the UAE and Bogota around the mining project of Santurbán. [10] There have also been espionage allegations against journalists, activists, and human rights defenders in Mexico protesting against the spy program Pegasus created by the NSO Group, an Israeli hacker-for-hire company.

Undoubtedly, Latin America-Middle East partnerships need to go hand in hand with the political will and realistic management of governments, backed by a continuous work of effective diplomacy and new means of communication with civil society in both regions. In doing so, Latin-American-Middle East relations could bring about potential solidarities and reveal pathways for a more equitable world.

[7] May Darwish. 2019. ‘Great and Regional Powers in the Middle East: The Evolution of Role Conceptions’, POMEPS Studies 34: Shifting Global Politics and the Middle East, https://pomeps.org/great-and-regional-powers-in-the-middle-east-the-evolution-of-role-conceptions