The impact of the Ukraine War on the global economy

Russia attacked Ukraine on 24 February 2022, and nine months later the chances of ending the largest armed conflict in Europe since the Second World War are not good.[1] The economic devastation triggered by the conflict has reverberated far beyond its borders. Supply chains have been halted, disrupting the flow of goods across the globe, and inflation, interest rates, commodity, and energy prices have all soared. International sanctions imposed on Russia[2] have impacted global economic growth, undermining efforts taken by developed countries to recover from the Covid-19 pandemic.

By the numbers: A bumpy road ahead

The International Monetary Fund (IMF) projects that global economic growth will slow, from an estimated 6.0% in 2021 to 3.2% in 2022 (Figure 1); even the 3.2% is 0.4 percentage points lower than the IMF’s published expectations in April.[3] Before the war, countries were focused on alleviating the economic impacts brought on by actions such as lockdowns taken to combat the pandemic. The IMF’s forecasts take into account the global conditions that shaped the economy prior to the war, including the Covid-19 pandemic lockdowns, the unusually strong demand for services and products, interruptions of the global supply chain, and increased restrictions on monetary and fiscal policies, which have affected emerging markets and developing economies (EMDEs) in particular.[4]

Adding to the gloomy forecast, global inflation rates are predicted to increase from 4.7% in 2021 to 8.8% in 2022 and possibly decline in 2023 to 6.5%. EMDEs are expected to be hardest hit, with food and energy costs rising 5.9% in 2021, 9.9% in 2022, and 8.1% in 2023 compared to increases of 3.1%, 7.2%, and 4.4% in advanced economies. Economies in Latin America, the Caribbean, Sub-Saharan Africa, and EMDEs in Europe are expected to experience the largest rise in inflation, with EMDEs in Asia seeing modest upward estimates, and Middle Eastern and Central Asian economies modest downward projections.[5] Annual inflation in Europe rose from 10.9% in September to 11.5% in October,]6] and from 8.2% to 7.7% in the United States,]7] remaining very high in Europe because of the globally high prices for consumer goods and services. Inflation is not expected to return to pre-war levels until 2024-2025.[8] 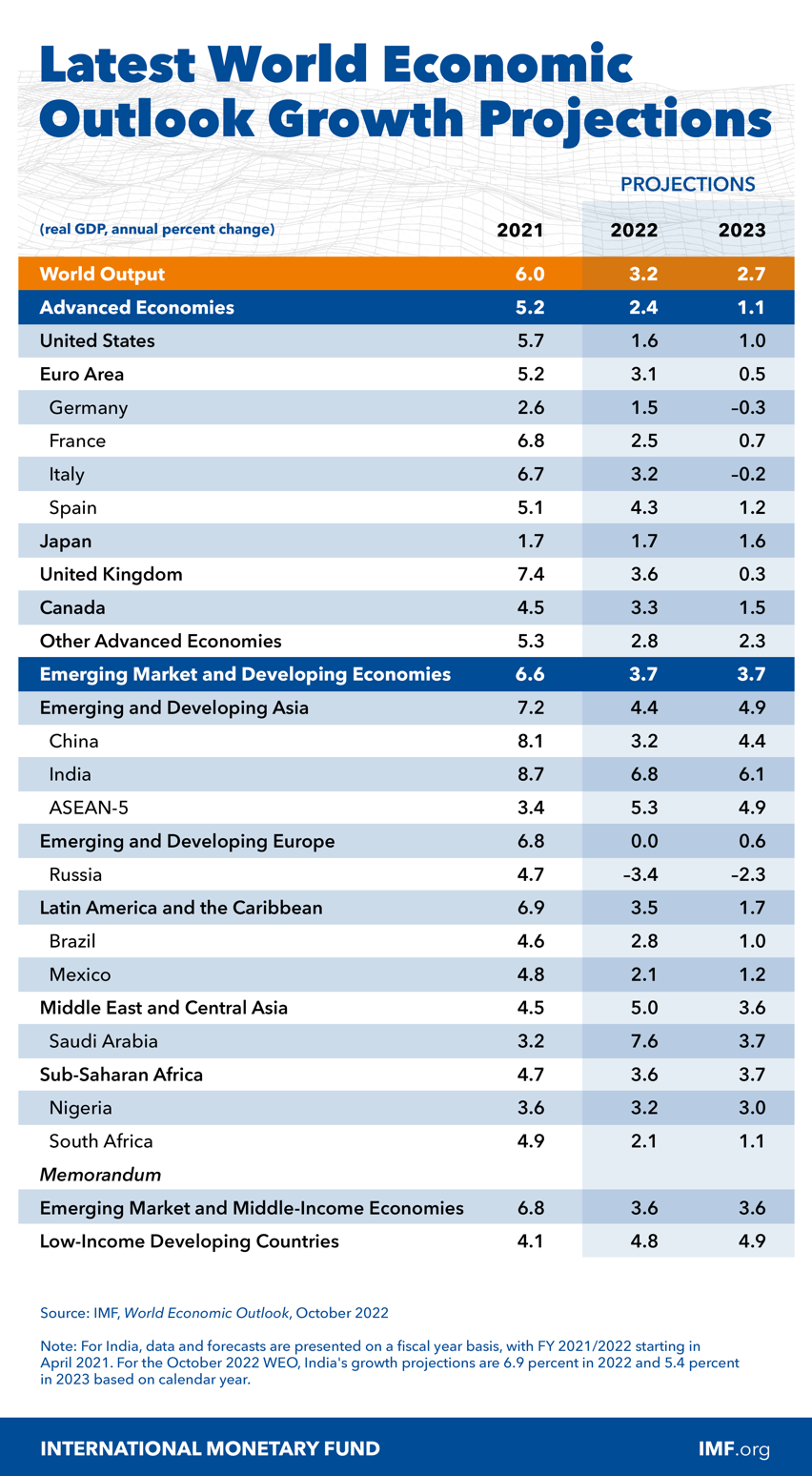 To regulate inflation levels central banks across the world are expected to aggressively raise interest rates. The interest rate in the U.S., for example, is forecasted to reach roughly 3.1-3.6% at the end of 2022 as the Federal Reserve gradually raise rates to tamp down inflation, in contrast to a rate of 0.25%-0.50% in March 2022.[12]

China has chosen not to raise their interest rates, but the country faces other major economic challenges,[13] including a real estate crisis. A major economic downturn in China, combined with an energy shock in Europe this winter, would significantly raise the likelihood of a worldwide recession. To note, the classic definition of a recession was changed by the White House this year to include a more holistic view of the economic situation that describes the low status of “the labor market, consumer and business spending, industrial production, and incomes” rather than the negative GDP growth of two quarters.[14] China, along with India, will also largely determine whether the West’s sanctions on Russia will be effective. The two countries account for over half of Russian oil exports by sea, so their willingness to participate in the sanctions is vital.

The breadbasket effect: The war in Ukraine and global food crisis

Many analysts are continuously revising their predictions every month in line with developments in the Russian-Ukrainian conflict. The international economy relies on exports from Ukraine and Russia, so the war has caused volatility and significant price surges to their key commodities. Food prices, for example, have skyrocketed as a result of the fallout from the war, and the world now faces a food crisis despite the Black Sea Grain Initiative, which is an agreement made between Ukraine, Russia, Türkiye, and the UN to ensure the safe transportation of grains, foodstuffs, and fertilizer from Ukraine to the rest of the world.[15] Ukraine is known as the “breadbasket of Europe” because of its agricultural exports, especially wheat, barley, corn, and sunflower oil,[16] and Russia is a key exporter of wheat, barley, and fertilizers,[17] as well as mining commodities including diamond, platinum, and gold.

The ports that connect the region with the rest of the world are now strategic military targets, and shipping is no longer safe. This disruption along with higher energy prices has specifically impacted low-income countries and countries that are highly dependent on grain imports, forcing them to accumulate high debt to meet their food demands (Figure 3). The increase in interest rates will make it even more expensive for these countries to pay back their debt.

Ukraine is also a source of iron, titanium, gallium, and germanium, and produces more than 70% of the world’s neon supply and 40% of its krypton.[18] These metals and noble gases are crucial for making semiconductors and fiber optics, products that are already in short supply because of supply-chain issues that were exacerbated by pandemic lockdown policies.

Between a rock and a cold place: Sanctioning Russia vs. soaring energy costs

Importantly, Russia is the world’s largest exporter of natural gas and the third-largest producer of oil. Many countries, including Germany, Europe’s largest economy, depend on Russia to meet their energy needs. Severe international sanctions forced Russia to alter elements of their economy, and the result has been a suspension of some its key exports, leading to shortages and thus higher prices globally.

European gas and fossil fuel imports from Russia decreased 20% in the last year (see Figure 2), and contributed to a steep increase in energy costs, a halt on supply chains, and soaring interest rates. Natural gas, for example, jumped from nearly 45 Euros last year to an astonishing 341 euros megawatt/hour in late August,[19] while the price of Brent Crude oil rose to $92-98/barrel.[20] A number of factors have made this energy crisis worse. Russian gas producer Gazprom shut down its Nord Stream 1 pipeline, which is connected to Germany, because of leaking in August; in September Nord Stream 1 and 2 were damaged in a bomb attack, the perpetrator of which has still not been identified.[21] Despite the supply issues, the European Union followed up its sanctions on Russia’s technological and financial sectors with an embargo on imports of Russian coal in August. The EU is planning a similar embargo on oil imports transported by sea by the end of the year, a time when the demand for energy in the form of heating fuel will increase. The decline of the euro, which fell to a 20-year low of 98.8 cents[22] versus the U.S. dollar, has contributed to even higher energy prices in the international market. 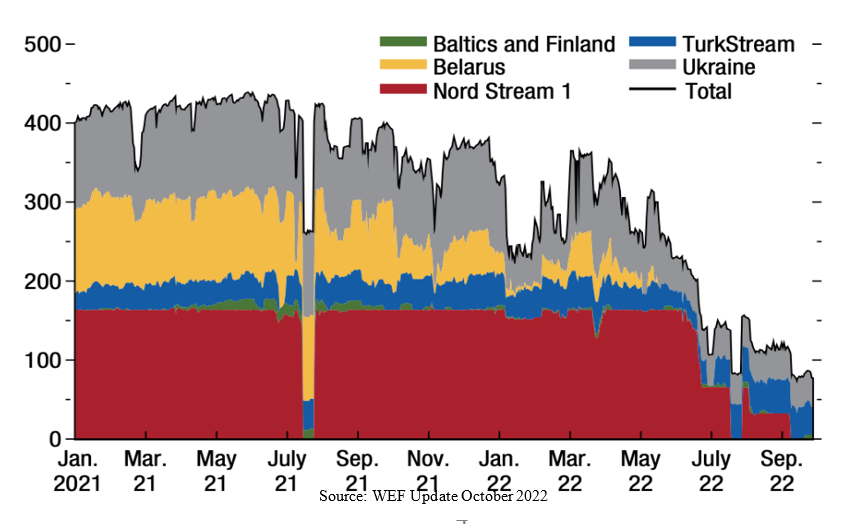 Potential scenarios for the global economy

Most governments implemented short-term policies intended to address the most urgent and disruptive economic repercussions that have resulted from the high inflationary shocks to the energy sector. The efficiency of these policy actions and the developments of the Russian-Ukrainian war will lead to one of the following potential global economic scenarios.

The policies implemented to combat the pandemic have significantly weakened the global economy, which now faces an energy crisis, record inflation, global market volatility, low business confidence, a global food crisis, and a slowing Chinese economy. The IMF described its lowered economic forecast as the “weakest growth profile since 2001” aside from the global financial crisis in 2008 and the peak of the pandemic, and believe a global recession is probable.[23] As a response to inflation, central banks around the world are increasing interest rates leaving economies more vulnerable to losing their growth momentum entirely. Europe is particularly vulnerable because of its reliance on Russian energy. Further disruptions to this gas supply could trigger a recession in Europe that will reverberate around the world.

The term stagflation combines the terms stagnation and inflation. It is used to describe an economy with slow economic growth, high inflation, and high unemployment rates.[24] Europe is the epicenter of stagflation concerns because of its slow growth and reliance on Russian energy, especially as winter approaches and energy and fuel prices rise even higher. Since the financial crisis in 2008, an unprecedented increase in the money supply was caused by the Federal Reserve’s currency and bank reserves’ rapid growth. A combination of printing and circulating more money at a faster pace than we are producing goods in the economy and the frequent economic burdens throughout the years can cause a rise in inflation rates. Undoubtedly, low economic growth, high inflation, and an unemployment crisis lead to high interest rates. Interest rate increases will have detrimental impacts on business activities and thus economic growth. This scenario has a 40% probability of happening given the unsuccessful efforts of central banks to slow inflation through interest rate hikes, in addition to the continuous increase of energy and fuel market prices.

Strong economic growth is associated with low energy prices, and any scenario predicting high growth will depend on oil prices falling to at least $60–70/barrel. Other factors that would lead to this scenario include a quick resolution to the Russian-Ukraine conflict and consequent improvements in global business and consumer confidence. Another vital feature of this scenario would be for Europe to reduce its dependence on Russian energy exports as early as possible and start implementing its plan to transition towards renewable energy. Germany could slowly reduce its imports from Russia and sign deals with other countries, such as Norway, the United Arab Emirates, Netherlands, Qatar, and the U.S. The consumption of natural gas in Germany accounts for 27% of the overall energy mix, however, prior to the war 55% of the gas consumed was imported from Russia.[25] The high economic growth scenario is dependent on central banks somehow being able to minimize inflation and at the same time avoid low-growth.

The geopolitical consequences of the Russian-Ukrainian war have exacerbated the global economic conditions and disrupted the efforts taken by governments to recover from the pandemic. Slow economic growth, high energy and food prices, and rising inflation and interest rates are some of the economic impacts that have resulted from the conflict. Given the uncertainty of the war, however, the stagflation scenario is the most likely.

[12] David Chang, “Federal Reserve Interest Rates and How They Affect You,” The Ascent, November 22, 2022, https://www.fool.com/the-ascent/federal-reserve-interest-rates/.

[16] Agnieszka Maciejewska & Katarzyna Skrzypek, “Ukraine Agriculture Exports — What Is at Stake in the Light of Invasion?” S&P Global, March 7, 2022, https://ihsmarkit.com/research-analysis/ukraine-agriculture-exports-what-is-at-stake.html.

[17] “The Impacts and Policy Implications of Russia’s Aggression against Ukraine on Agricultural Markets,” OECD, August 5, 2022, https://www.oecd.org/ukraine-hub/policy-responses/the-impacts-and-policy-implications-of-russia-s-aggression-against-ukraine-on-agricultural-markets-0030a4cd/.

[25] Philip Oltermann, “How Reliant Is Germany – and the Rest of Europe – on Russian Gas?” The Guardian, July 21, 2022, https://www.theguardian.com/world/2022/jul/21/how-reliant-is-germany-and-europe-russian-gas-nord-stream.