The persuasion paradox: Why foreign states are dominating the Arab Twittersphere

Masters in International Relations from the University of Wollongong.

In January 2006, then U.S. Secretary of State, Condoleezza Rice, announced the tenets of the administration’s Transformational Diplomacy policy, of which building a Virtual Presence Post would be a key component.[1] Rice’s choice of wording revealed how forward-looking this policy was at the time. “Technology is collapsing the distance that once clearly separated right here from over there,” she said, reasoning that achieving Transformational Diplomacy in the Middle East would be achieved by telling “America’s story.” Rice saw an emerging opportunity in new technology to propagate a favorable image of the United States in the eyes of a foreign audience, and do it at scale. Whether this narrative building should be considered public diplomacy, as U.S. diplomat Hans Tuch[2] would have categorized it, or propaganda, as esteemed journalism educator John Spicer[3] referred to it, is a matter of debate, but both schools would agree that crafting an international image is an important part of International Relations (IR).

The Bush administration was quick to realize the political possibilities that lay ahead within cyberspace. Twitter was created three months after Rice’s speech, and the U.S. State Department became one of the site’s earliest adopters, joining within the first year.[4] The U.S. was not alone in wanting to use technology to minimize the distance “between right here and over there.” The trend was truly global. Those in the IR community were attracted to Twitter because it was both a micro-blogging site (posts were capped at 140 characters) and a social networking site. By 2018, the trend was also scalable and quantifiable; a 2018 “Twiplomacy” report by the international public relations firm Burson Cohn & Wolfe found that 97% of United Nations member states had established a Twitter presence.[5] The global trend was not just for state actors, either. Intergovernmental organizations, non-governmental organizations, and international organizations soon joined, and the resulting cluster of everyone from India’s Narendra Modi (@narendramodi) to the World Health Organization (@WHO) and civil society actors such as Palestine’s Mohammad El Kurd (@m7mdkurd) gave Twitter the political nature that it became associated with.[6]

Only after the clustering of IR actors within this new micro-blogging site did the preconditions for the emergence of what we now call Twitter Diplomacy exist. In the context of this article, Twitter Diplomacy refers to the calculated use of the platform by IR professionals for ideological, social movement, religious, political or humanitarian reasons to influence a specific audience and thus achieve favorable political results exclusively through soft power.[7] States are attracted to Twitter’s unique platform because it extends accessibility voluntarily to audiences open to political messaging at a low cost, at high speed, and with unprecedented reach. The platform affords states that are lacking in the currencies of power such as hard power and economic power a rare opportunity to renegotiate the visibility of their national stories.[8] Twitter also privileges written content, which makes it more practical and socially acceptable to both senders and receivers of complex and sometimes charged political messages than platforms that privilege visual or audio content. While Twitter has always had video sharing, its viral content has never been any other format but text-based. When pictures and videos do make it to wide amplification on Twitter, they usually do so because they aid the delivery of some provoking thought. For these reasons, Twitter is rated the most popular platform for public diplomacy.[9]

As Twitter was gaining its political momentum, the first wave of Arab state actors joined Twitter in 2009. While this two-year adoption-lag may not seem like a lot to IR theorists, it is significant in cyber-time and left room for the flourishing of both extreme ideologies[10] and the formation of a civil society, which was a threat to control in authoritarian states.[11] This “Digital Pilgrimage” saw a whopping 125 Arab government accounts on Twitter by the end of 2020. As we will discover, this increased presence did not necessarily lead to success for Arab states in spreading their national narratives.

The competitive sport of Tweeting

The most obvious feature of cyberspace, its openness, too often seems like its most invisible feature. Indeed, it was this feature of cyberspace that Twitter was attempting to capitalize on by “getting people to speak freely and exchange information and ideas.”[12] This openness, however, fundamentally challenged the hierarchal relationship of communication.[13] States had established legitimate social contracts and high trust reserves with their citizens, who often felt emotional attachments to state representatives and were influenced by the intense forces of nationalism. Twitter removed many of these advantages, giving non-state actors the same footing to offer a different story than the state, and as prominent Harvard professor Joseph Nye said: “The story and only the story wins.”

The Canadian Foreign Ministry, for instance, posted a Tweet on 3 August 2018 in support of jailed human rights activists, Samar Badawi and Raif Badawi, which read: “[…] we urge the Saudi authorities to immediately release them and all other peaceful #humanrights activists.”[14] Saudi Arabia responded to the Tweet by recalling its ambassador, expelling the Canadian ambassador, suspending major economic ties and Tweeting: “The Canadian position is an overt and blatant interference in the internal affairs of the Kingdom of #SaudiArabia and is in contravention of the most basic international norms and all the charters governing relations between States.” Soon, a Twitter handle linked to the Saudi Royal Court tweeted an image of an Air Canada plane flying towards Toronto’s iconic CN tower with a text reading “sticking one’s nose where it doesn’t belong” and the caption: “He who interferes with what doesn’t concern him finds what doesn’t please him.” The image went viral, eliciting a public outcry that interpreted the image as a direct reference to 9/11, and hence an open threat. The Saudi foreign ministry defended itself, explaining that the airplane symbolized the Canadian ambassador flying home. The magnitude of the public response shifted Saudi’s position from very offensive to very defensive, indicating just how consequential Twitter can be in winning the story, both online and beyond.

It is this levelling of the playing field that makes Twitter both an opportunity and a threat for winning the narrative. It offers a competitive framing environment, which places a high negative premium on players who choose to disengage with the platform, making them especially vulnerable to negative framing by competitors. China’s disinformation campaign during the early phases of the Covid-19 pandemic, attempted to create confusion in the U.S. by spreading false information that then-president Donald Trump would be instituting a two-week national lockdown mid-March.[15] Though Trump did announce a “15 days to stop the spread” lockdown order on March 16th.,  many states did not follow this guidance. The public panic was so significant in response to the disinformation campaign that it forced the National Security Council to break its silence and take the very unusual step of Tweeting back that this was baseless information.

Most political users have realized by now that they really have only two options when it comes to Twitter: to frame or be framed. This hard-learned lesson, however, seems to have been forgotten by some Arab states. It might have been expected that the region that experienced the Arab Spring, an event that sparked thick volumes on a possible correlation between social media and social mobilization,[16] would lead the way with robust Twitter Diplomacy strategies, but the data below reveals a particular vulnerability of an overtly competitive framing environment on the Arab Twittersphere. Consider the data below that ranks state-actors on the Arab Twittersphere in terms of activity during 2020.

Table 1 – Most Active on Arab Twittersphere 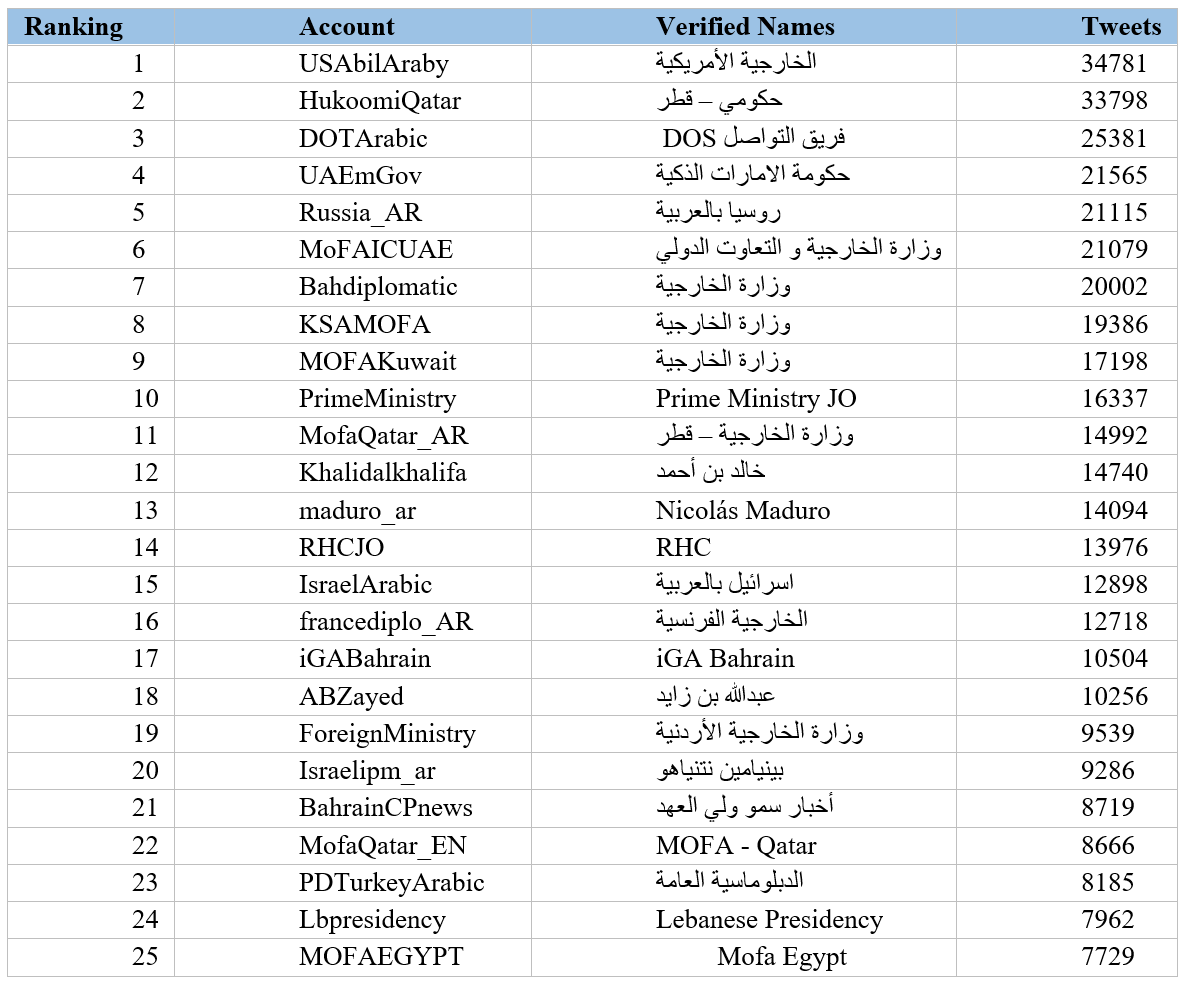 The table above ranks the top 25 state actors detected on the Arab Twittersphere by total number of Tweets within a given year. As outlined, the most active of these state accounts on the Arab Twittersphere is by no means an Arab state — it is the U.S. The U.S.’s dedicated Arabic Twitter channel tweeted a whopping 34,781 times in 2020. This is not a small margin when benchmarked against the ruler of Dubai, Sheikh Mohammad Bin Rashid Al Maktoum, who only tweeted 5,994 times that year. Admittedly, presence is not equivalent to effectiveness but it does mean that the U.S. had 28,787 more opportunities to frame and spread its version of the story than MBR did.

This activity is not by chance. Foreign state actors are targeting the Arab online public sphere, sometimes with multiple accounts. Further analysis needs to be done to situate the Twitter Diplomacy policies of each state with their foreign policy objectives to understand why engaging an Arab online audience is clearly a motivation for them. Nonetheless, what this reveals is that the modest activity from Arab states is leaving a margin of space for foreign state actors to exist, flourish, and possibly win the narrative.

The chart above shows a high level of foreign competition for the Arab public’s attention. A long queue of states are interested in making their story heard “over there,” and they are using Twitter to target this audience.

In an Arab context, there is nothing new about foreign states going out of their way in an attempt to construct a favorable image. Consider, for instance, that Britain was so committed to this goal during its occupation of Basrah during the First World War that it actually bought all private printing presses and cancelled active newspaper licenses.[17] While this may seem like an extreme example from an all-too-distant past, it provides this embedded argument —unless one subscribes to the unpopular opinion that Twitter is an imperialist tool, even though colonialism is now out of style, it is odd to still have foreign states attempting to tell their story more frequently to an Arab audience than the Arab states themselves.

Maja Simunjak and Alessandro Caliandro, “Twiplomacy in the Age of Donald Trump: Is the Diplomatic Code Changing?” The Information Society 35, no. 1 (January 2019): pp. 13-25.

Marc Lynch, “After Egypt: The Limits and Promise of Online Challenges to the Authoritarian Arab State,” Perspectives on Politics 9, no. 2 (2011).

Constance Duncombe, “Twitter and the Challenges of Digital Diplomacy,” SAIS Review of International Affairs 38, no. 2 (2018).